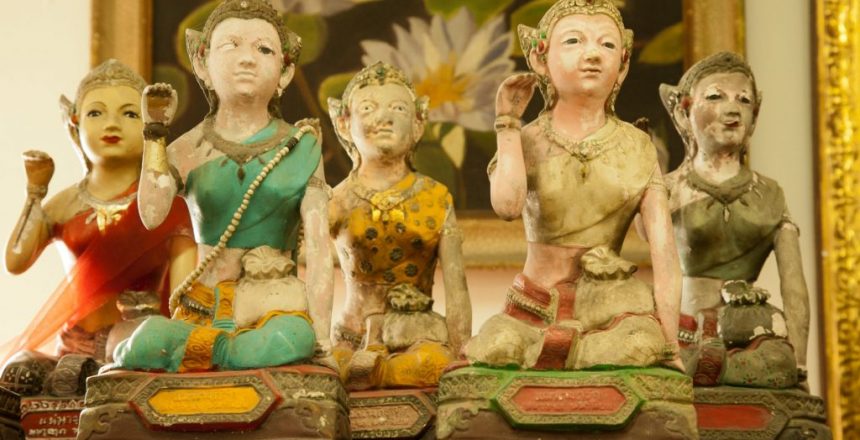 How the ‘beckoning lady’ talisman has been body-morphed and re-dressed for the consumer age.

Rare is a Thai shop or stall without a talisman of Nang Kwak, the beckoning lady. This “Goddess of Wealth” is akin to the Hindu deity Lakshmi, but is more of a Thai folkloric belief, with two origin myths. In one she is a defender of the exiled king in the Ramakien epic. In a Buddhist version she was Supawadee, a merchant’s daughter blessed with good fortune by a monk, making the trading family richer. Her form changes with fashion like the merchandise that she helps sell. Her contemporary guises tell us much about Thai lifestyle and taste.

Her classic design resembles that of the rice goddess Mae Phosop, wearing a crown and a traditional dress, typically red. She beckons with one hand, politely palm-down, and rests the other on the ground or her lap, with legs folded to the side in phub piab style. Larger statuettes from the mid-20th century are a prized collector’s item, with their artfully peeling paint and patina from incense smoke. She also gets depicted on cloth in a pha yantra cabalistic diagram, embossed into metal charms, or baked into clay as a tablet for wearing in a clasp around the neck. A portable Nang Kwak is ideal for travelling merchants.

Amid Thailand’s Asian Tiger boom, so old-fashioned did Nang Kwak look that traders increasingly substituted her with Maneki-Neko, the Japanese beckoning cat. Hailing from an esteemed developed country, Maneki-neko comes in gold plastic, often with a battery-operated movement of its upraised paw, beckoning shiny modernity.

Go to a shop of religious objects today, though, and classical versions are rare, even in the moulded resin miniatures sized to fit on countertops. Instead, she comes clad in lurid colours, some daubed in neon paint or glued with multi-colour glitter. As Thailand’s grown richer, she has grown in girth, with a plumpness associated with wealth. So a well-fed Nang Kwak is now beckoning for more than she really needs, either with both hands, or with her left hand resting on a money bag, begging with an upturned palm.

Such change isn’t new. She’s always been morphing from one form to another. She is more ancient than Maneki-neko, being derived from a down-curled herbal leaf dubbed nang kwak. Carrying that leaf was the original natural talisman, and the leaves were later made an ingredient of Nang Kwak statues, just as clay amulets are baked with auspicious ingredients like ashes or herbs. In old amulet forms like the Nang Kwak Menorah she has a stylised bulbous shape. The Beckoning Lady even gets combined with the male form of the phallic amulet palad khik as a Beckoning Penis. So being presented as a lady in mid-20th century neo-traditional “Thai” national dress was just a phase in her long folk evolution.

In the years since Very Thai’s first edition, Nang Kwak has become a pop icon. She was showcased in exhibitions at TCDC and Museum Siam. Her graphic pops up on high-end souvenirs, as in Siam Center’s Absolute Siam shop, which sells a bag showing a bearded Beckoning Backpacker seated phub piab.

She has also grown monumental. MuseumSiam’s permanent collection’s entry has a Nang Kwak as a giantess in her plump style. IconSiam, too, has a super-sized Nang Kwak attracting customers into the mall. And Absolute Siam is presided over by an incarnation of her as a Beckoning Pig in purple fur boob-tube and floral makeup.

Cashing in on her role as wealth goddess, Siam Commercial Bank issued its business account-holders with a plastic Nang Kwak giveaway to display as the bank’s brand mascot. Dubbed “Mae Manee,” she holds a monogrammed handbag and is clad in SCB purple livery and Baht symbols, plus a QR code for activating “Easy Pay.” With enlarged eyes in a toon-style face with big hair and enlarged eyes, this beckoning bank teller resembles a Bratz doll.

Designers have given her a style makeover. Saran Yen Panya embroidered her likeness into vinyl as the cushion of chic stackable stools. The design firm This Means That markets her statuette called Miss Well-Come, rendered in pink resin with sunglasses, big hair and a Prada handbag. The label reads: “The rebirth of Nang Kwak is a benevolent spirit. She will deemed to bring luck, especially in form of money, to the household.” Clearly she has graduated from life as a shop girl, beckoning trade, into a hi-so adornment for the home, beckoning for cocktails.

In the Thai art world, Sakharin Krue-on staged an installation of Nang Kwak, with statues and animated projections. The artist Pan Pan Narkprasert featured her in his exhibition of amulets-with-a-twist. Pan Pan – whose famous drag persona Pangina Heals, is co-host of RuPaul’s DragRace Thailand – cast Nang Kwak in bronze in the style of Beckoning Lady Gaga, with outsize glasses plus long hair with bangs and a gigantic bow. This is Nang Kwak as cosplay, reinventing her look as often as Lady Gaga.

PHOTO CREDIT: Photographs by Philip Cornwel-Smith, except for those by Pan Pan Narkprasert and This Means That.