Future Wife is a wedding, a play, and the weirdest thing I’ve done in Google Sheets 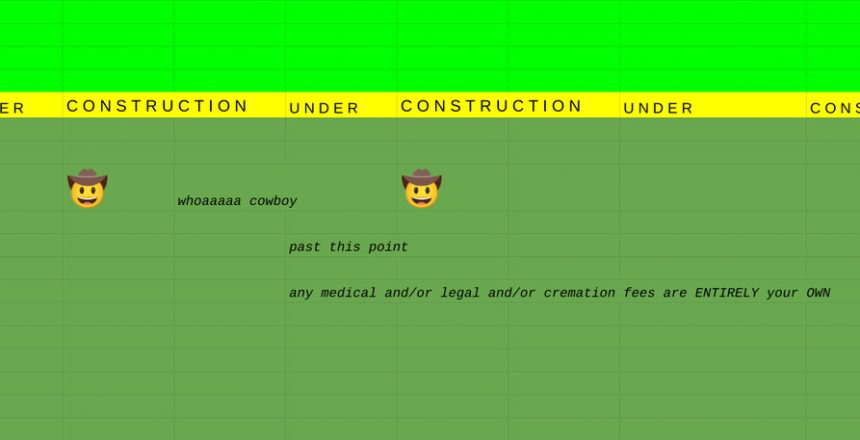 The pandemic has led to a collection of unusual digital experiences, from Google Forms escape rooms to whole virtual, two-dimensional comedy shows. But the interactive digital play / upstate barn wedding I attended last Friday, Future Wife: Party in a Spreadsheet, takes things to a strange new level. The show, co-created by playwright ruth tang and director Sarah Blush, and put on by a cast of game collaborators and theater company New Georges, manages to be playful, confounding, and surprisingly, a little touching. Basically all the things Google Sheets never are.

It’s difficult to describe Party in a Spreadsheet in a way that makes sense. There are communist goats, alien activists, several themed islands, and an anonymous audience masquerading as a variety of exotic animals. There are also plenty of ominous threats in the official description:

You’re invited to a Very Heterosexual Wedding, but we can’t have a real wedding, so we made one out of spreadsheets. It’s a dance party so I hope you’re in comfortable footwear. It’s a potluck so I hope you bring some food. It’s a vast and terrifying landscape. It’s a barn filled with massive machines. Did I not say that? Don’t worry. You could be the one swaying on the lawn to the rasp of knives being sharpened. Welcome.

The actual experience of attending starts with receiving a wedding invitation via email (“We gather to celebrate the heterosexual union of Boots and Patsy”). At the set start time I was encouraged to log out of my Google account or open an incognito window, and join the festivities. Audience members are first dumped into a “welcoming meadow” sheet where they’re greeted and encouraged to wander around and start editing the sheet.

Blush and tang describe the meadow as a sort of tutorial for the experience. “That opening page is built to be a space in which we are modeling behavior,” Blush says. It introduces the kinds of interactions that will be used during the show and that any audience member can do like live text editing, coloring cells, pasting GIFs and images, and basic improv. If you can wrap your head around the roleplay at the start of the experience, you can handle Future Wife: Party in a Spreadsheet.

From the meadow onward, things get more bizarre. The Boots and Patsy wedding isn’t quite what it seems, from the fact that Boots is a goat, to the aliens that interrupt the ceremony. Based on the breadth of locations and settings, Future Wife clearly set up to touch on a lot of different subject matter. Some themes are obvious, like how the heterosexual rigidity of the “wedding industrial complex” (as Blush refers to it) is mirrored in the straight-laced way Sheets is often used for work. “People experienced [Google Sheets] as a place of work or a place of like, you know, drudgery,” tang notes. Other non-wedding or goat-related themes are more buried.

I’m not sure Sheets is the best way to experience theater — Party in a Spreadsheet is referred to as an “adaptation” of tang’s original play in an “extremely loose sense of the word” — but it did produce an experience that lingered with me. Going in, I thought seeing someone “perform” Sheets editing would be the most interesting part of this. I’ve been caught unaware in a Google Doc and pretended to work “intelligently” for an editor. But what surprised me more were the asynchronous interactions.

Blush and tang leave the audience a lot of digital space to interact, sometimes a whole pirate island’s worth, coordinating with their cast over Discord to prompt discussion and improv with lines delivered by the alien activists trying to rescue Boots. Combined with the anonymity inherent to the experience, this can lead to some candid sharing. It also produces magical moments of interaction. Multiple times I left a goofy attempt at being funny in one sheet, only to come back later and find an honest response or multiple equally dumb riffs.

It’s those moments that wowed me. Honesty, playfulness, even community in a shared anonymous space is an increasingly rare thing in 2021. You’d be considered naive to expect it. But for its hour runtime, Future Wife makes it happen.

“I think that aspect of knowing that there’s so much stuff happening and there are people around you that you can interact with, if you wanted, I think that’s a sense of freedom, but also kind of a restriction,” tang explains. “I think that that is why you know, that’s why I personally find the experiences, even performing the show, very fun, and very… kind of like the experiences of being with people, weirdly enough.”

Future Wife: Party in a Spreadsheet has currently finished its six-show run. You can view the spreadsheets from previous versions of the show on ruth tang’s website.