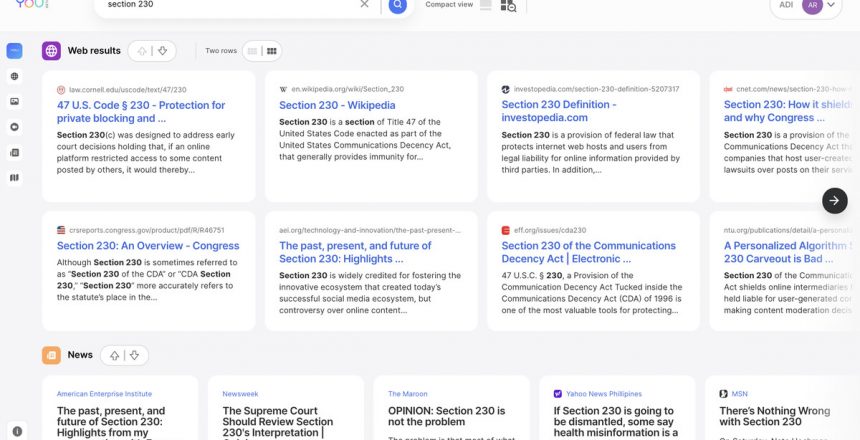 Google Search organizes the way billions of people think about facts and data, and for years, it’s been organized around a principle dubbed “one true answer”: the idea that most people are looking for something best answered by a succinct factual snippet. But that’s not the only way people might navigate the web, and today, a company called You.com is trying something different: a search engine built around sorting and comparing results.

You.com, founded by two former Salesforce employees, is opening today in public beta and announcing a $20 million funding round led by Salesforce CEO Marc Benioff. The service abandons the linear list of links you’ll find in most general-purpose search engines, opting for a grid of answers organized by source. The sources include generic categories like “web results” and “news” but also specific sites like StackOverflow, Wikipedia, Twitter, Amazon, LinkedIn, and individual news sites like The New York Times.

On top of this organizational change, You.com’s big differentiating feature is that it lets people influence which sources they see. You can “upvote” and “downvote” specific categories, so when you run searches, you’ll see preferred sources first, neutral searches next, and downvoted sources last.

The You.com grid encourages comparing sources instead of clicking the first link

When I searched for “Section 230” on You.com’s pre-launch beta, for instance, it defaulted to showing a box of general “web results” first, including links to Cornell University and the Electronic Frontier Foundation. But I could also opt to see something like a Wikipedia snippet or a series of Reddit results first. The categories are also influenced by the context of your search. If I searched “Moonfall” it would favor an IMDb-powered “What to Watch” box for the upcoming Roland Emmerich film, while looking up “infrastructure bill” prioritized a general news grid and media coverage from many different outlets.

Some of these searches — like the Section 230 one — ultimately surface pretty similar results to Google. But the interface encourages looking across a range of sources rather than clicking the first one or two links. It also includes interesting tools for specific use cases. Searching “for loop javascript,” for instance, will summon lists of reference pages on Google, but You.com will surface actual plaintext snippets of syntax from sources like W3Schools that you can easily copy and paste.

You.com isn’t optimized for answering basic questions the way Google is, especially for queries that require guessing what people want instead of what they literally type. It’s a lot more willing to encourage clicking through to other pages — if you want the “actor who plays Sherlock Holmes,” You.com will deliver links to lists while Google will give you a grid of movie stars. It doesn’t include little features like offering answers in the search bar.

And You.com is generally worse at guiding your eye to the most relevant information. If you’re not used to closely reading the text of search results, it looks overwhelming and sort of cluttered. I only used a desktop version of the prelaunch beta, which feels like the way it’s supposed to be experienced but isn’t necessarily where most people want to search the web.

But the service seems far more honest about its own limitations than Google. Google’s text snippets are arguably the platform’s worst feature, granting a false sense of authoritativeness to inaccurate or offensive information or even summarizing an accurate answer in a dangerously wrong way. (Full disclosure: I could only find that last link through Google, where I got it by hunting down “google seizure snippet,” while You.com offered general information about snippets and seizures.) You.com does offer a “Quick Facts” box for queries like “distance from the Earth to the Moon,” but it’s delivered alongside a bunch of other results.

You.com comes tantalizingly close to being an engine for web search power users who like comparing multiple sources of information. It’s still missing key features like searching within a limited date range, something co-founder and CEO Richard Socher says is coming later, and it’s not as all-purpose as Google. (Clicking the closed beta’s Maps icon actually just directs you to Google Maps.) But that’s part of the appeal — Socher reasonably describes You.com as “unbundling” search from a Google-style web empire.

Weirdly, the company doesn’t make this pitch very well in its launch announcement. It describes its system as “summarizing results from across the web,” which feels almost precisely backward. Socher says the phrase refers to You.com’s grouping of results by source, but compared to Google, it features practically no explicit editorial summarizing of information.

Like DuckDuckGo, Brave Search, and other services trying to chip away at Google’s overwhelming dominance in search, You.com emphasizes the idea that it’s more private and less heavily tracked. It’s not supported by ads and linked with countless tie-in products the way Google is, and there’s an incognito mode that You.com says hides your IP address. Among other things, it promises that it will never target personalized ads at users. The service, unfortunately, doesn’t have a business model at all yet, however, so it’s not clear what kind of other tradeoffs it might have to make in the future.

You.com probably won’t appeal to everyone, but it’s offering an interesting and fairly unique feature set. It’s one of the rare non-subject-specific search engines that avoids feeling like a more principled but practically inferior version of Google — encouraging thinking about the web as an actual network of websites, not just grist for an answer box.