Paces of Life on Bangkok’s Riverside 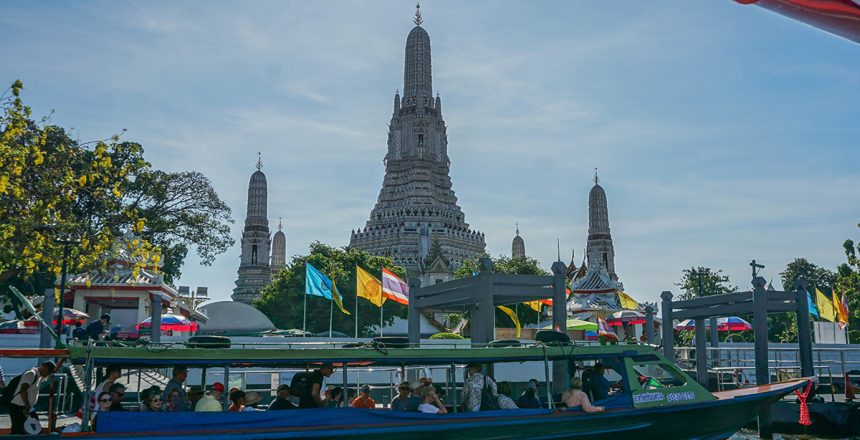 At times I have spent longer in traffic between Sukhumvit and the Bangkok Riverside than on the Euro Tunnel between London and Paris. Which is a stupid analogy, I know, but it does show how a “quick” day out to the Bangkok Chao Phraya River can be comparable to a short break or holiday. And, on our last day-trip to see the new ICONSIAM, we travelled to the Chao Phraya Riverside from the Ramkhamhaeng area of Bangkok, using 4 taxis, 4 connecting , as well as 4 different boats to explore other parts of the river. And we were pretty much moving non-stop for 12 hours straight. Making it a rather tiring day out.

So more often than not, we would treat visits to the Bangkok Riverside as short holidays. And, on one of our more recent visits, we booked a night at a hotel, with Chao Phraya river views, and were able to enjoy a more relaxed time, with a bottle of wine, and serene views of the river from above. This hotel was on the Thonburi Side of the Bangkok Riverside (Avani+ Riverside Hotel), which pretty much connects directly to a private pier making it easy to navigate all the attractions whenever you please. Although we rarely do. As we tend to make the most of the hotel, whereas we’ve already covered almost all the nearby attractions, from the towering plazas near Sathorn Pier, right up to the local river life of further-flung Nonthaburi.

River Taxis: We always use the regular express river taxis, which cover both sides of the Chao Phraya River, and cost very little (no more 20 Baht in the nearby areas). They are also relatively easy to navigate, even as a tourist, where you just tell the ticket officers your planned destination, and they’ll point you to the right queue (the full map here).

Hop-On/Hop-Off Boats: Otherwise many tourists opt for the Hop-On/Hop-Off Boats which kind of limits travel options but makes the process much easier with just one ticket giving unlimited travel on their boats between 09:00 am and 17:30 PM. These cost around 200 Baht pp and this covers 9 of the more touristy piers along the riverside (advance tickets available here).

Long-tail boats: It is also possible to hire long-tail boats by the hour, but these are better to explore the connecting canals (), rather than from A to B on the riverside.

For those arriving from the new city centre, the obvious starting point would be Sathorn Pier, which connects to the convenient Skytrain lines (BTS) at Saphan Thaksin BTS station (Exit 2). The Sathorn Pier is then an easy jump-off point when exploring the Bangkok Riverside. And there are even free shuttle services offered to the more commercial attractions along the Chao Phraya River e.g. ASIATIQUE and ICONSIAM. And while it is possible to take a taxi to the riverside from various parts of Bangkok, it really isn’t advisable during busy traffic times, unless you’re ready to spend hours in the back of a taxi. Anyway, the map below shows our recommended stops on the Bangkok Riverside, in order from south to north.

Asiatique is more is an evening attraction (Opening Hours: 17:00 PM – 00:00 AM) when the open-air riverfront mall hosts around 1,500 independent shops, 40 restaurants, a number of bars, and various event halls. Not to forget the giant wheel. There are also a number of traditional and modern Thai cultural event theatres showcasing performances like Joe Louis Puppet Theatre, Muay Thai Live, and Calypso Bangkok (ladyboy) cabaret show. There’s also a historical connection with the mall, where it’s located on the former site of a major trading port. And the century-old warehouses, which once housed teak for export, have been transformed into rather impressive shopping and entertainment venues. However, it has been a while since my last visit to Asiatique, so my sketchy images below.

ICONSIAM is one of the newer additions to the Bangok Riverside landscape (opening 2018), and is really just a rather massive shopping mall (the biggest in Thailand), often known as the “Mother of All Malls”. But, aside from the shopping, there is more to ICONSIAM. And it’s a bit like a theme park in parts, built inside a mall, with traditional Thai cultural scenes, including old teak houses and street food markets literally replicated, and built through the mall. Although it obviously lacks a sense of authenticity. But there are a fair few alternative attractions, like the views from the 2nd-floor roof terrace which connects to the mall’s massive Apple Store, as well as the ICONSIAM musical fountain show (ICONIC Multimedia Water Features) that takes place 3 times a day, at , and 21:00PM (as shared in our video below).

Many of the old town temple attractions are found along the Chao Phraya Riverside in Bangkok, including The Grand Palace and Temple of the Emerald Buddha (Wat Phra Kaew), The Reclining Buddha (Wat Pho), and the Temple of Dawn (Wat Arun). They are also within easy reach of each other, meaning all can be covered in one day by foot, although a quick boat is necessary for Wat Arun as it’s found on the opposite side of Ta Tien Pier, directly on the banks of the river. For a day tour, I would suggest starting with the Grand Palace as it closes earliest (), maybe squeezing The Golden Mount in as well, then finishing with Wat Arun at sunset.

Found next to Wang Lang Pier, this area is a complete contrast to the highrise hotels, tourist-packed temples, and spanky malls. Instead, Wang Lang Market is a rather fascinating maze of local nicknacks, and seemingly endless alleys, with all sorts of local street food (our ultimate street food guide here). And it also a favourite spot for many of my local friends, who would take me for nights out through the traditional teak cafes, restaurant, and riverside bars. Which are typically priced for locals unlike the touristy parts of the river. But some of my best times in Wang Lang was just getting lost in the traditional backstreets of this bustling part of Bangkok. It’s also worth doing the same opposite, surrounding the Tha Maharaj Mall.

Phra Athit Road, found next to Phra Athit pier, is another of those local hangouts, with laidback riverside vibes, traditional shophouse character, and lots of local charm. And there’s also a fair bit of historical significance in the area, with Phra Sumen Fort, one of the last-standing watchtowers of the old city walls, found at the start of the road. Next to it is then Santichaiprakan Park, which is a hive for local life and people watching, especially in the evening hours, beneath the backdrop of the iconic Rama 8 Bridge. Phra Athit is also one of the few bike-friendly areas of the city, with a cycle route following a riverside promenade from the pier to the open-air pavilion area at Santichaiprakan Park. It is also a short walk, and runs somewhat parallel, to the backpacker hangouts around Khaosarn Road.

Nonthaburi is often referred to as ‘the rural side of Bangkok’, which is slightly odd given it’s a city of over half a million people, making it the second largest city in Thailand. But there certainly is a different vibe down this side of the river, where the simplicity, pace of life, and patches of green on the landscape, set it apart from the busy urban scenes of the Bangkok Riverside. And most of the local attractions are found around The Pier and Clocktower including the local fresh and wet markets in the daytime, and the lively scenes of street hawkers and uniquely Thai local life at the
Chao Phraya riverside night market. There’s also the Nonthaburi Museum with local historical bits ’n’ bobs and whatnot. Note, Nonthaburi is normally the last stop on the line when travelling from the Sathorn Pier (Saphan Taksin). (My full Nonthaburi guide here).

While Nonthaburi is normally the last stop on the line, occasional river taxis continue further towards Koh Khet Island, a manmade island famous for its unique Mon pottery heritage. Where the island was inhabited by Mon refugees, fleeing their homelands in Burma, who traded locally in terracotta-ware. And there are still some active pottery spinners, exhibits and museums, open to tourists. it is just a completely off-the-beaten-track destination along the Chao Phraya Riverside, that feels more like rural Isaan than the urban sprawls that surround it. It is also easy to discover on foot, although there is also a circular cycle path, and bicycle rental at the arrival pier, to make the most of the visit. To reach Ko Kret island from Nonthaburi Pier, take a simple taxi to the crossing at Wat Sanam Neua temple, where boats leave regularly to Koh Kret. (Our full Ko Kret Guide Here).

By far the best way to experience the Chao Phraya River is on an evening dinner cruise, when the temperatures are more amiable, and the temples and riverbanks are twinkling with lights. These river cruises typically last 2 hours, from around 09:00PM with likely stops at both Wat Arun (Temple of Dawn) and the Rama 8 bridge. But I will forever recommend paying the extra for the more intimate Chao Phraya Dinner Cruise and dining experiences, as we admittedly opted for the cheapest option, which included lots of queuing, generic buffet foods, renditions of La Bamba, and all those holiday stereotypes (our full review here). So it was far from magical or romantic. Anyway, you can find a list of River Cruises here.