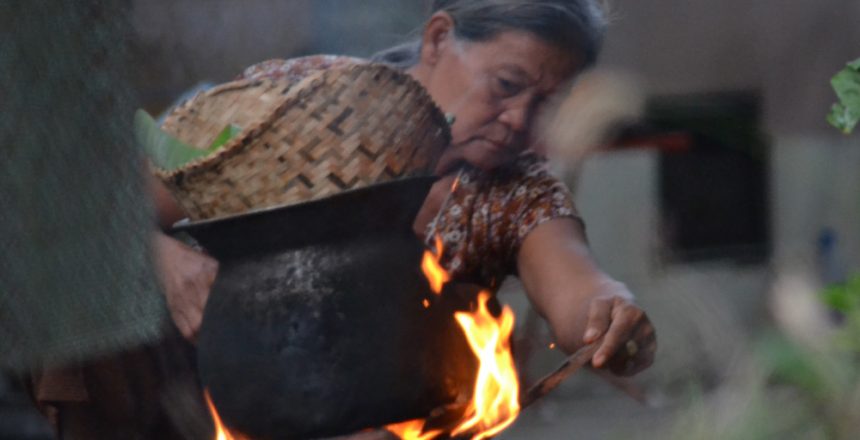 These are edited excerpts from our book A Potato in a Rice Field: Fanfan also takes on a project during our year in Broken Road, where she would document a cookbook with the favourite recipes of rural grannies (including Thai Pumpkin Curry). Although the project proved trickier than we expected, given almost every granny in Broken Road gave the same answer. ‘Nam prik pak’. ‘Nam ’. ‘Nam ’. A simple meal of boiled veg and a side of chilli dip. Something they eat for almost every meal of every day. And it at least works well with their lack of teeth due to a lifetime of betel chewing.

At the same time, they are always excited to cook for me, and it feels almost like they compete to satisfy my tastes at times. And it’s a bit like having my own personal chefs on the compound. Anyway, I won’t say that Yai Thip is the best cook of the family, because I’d get into trouble with the rest, but what I love about her cooking, is that she always does it all the traditional way. Where she cooks outside, over a stove fired by coconut husks and kindling, and she just takes her time to make quality ingredients from scratch.

So here I share one of the first recipes she ever cooked for me, a Thai Pumpkin Curry (Kaeng Fuk Thong), made pretty much from scratch, with no pre-made coconut milk or curry pastes (squeezing coconut milk below).

Anyway, I have taken the job as coconut opener on the compound, where I am tasked to pry open the outer husks, due to my superior leverage, rather than my strength. Yai Thip then cracks them apart with a machete, and the coconut husk is removed and thrown to the side, to later be used to feed the fire on the stove.

Now with the inner shell left of the coconut, it is cracked in half using a machete, and the inside flesh is grated out by hand. The grated coconut is then mixed with a cup of hot before it is pressed and squeezed through a simple sieve to make coconut milk.

Next up is the curry paste, where a Thai Pumpkin Curry traditionally uses a red chilli mix, such as red curry paste (Kaeng Phet) or panaeng curry (Kaeng panaeng). And both work well. But most households will have their own chilli mix, known as “Prik Kaeng”, which is more of a blend of ingredients, rather than a paste. And it’s a bit like a multi-purpose chilli mix made from dry chillies, galangal, kaffir lime leaves, garlic and lemongrass (although recipes will vary all over).

This chilli paste can also be used in all sorts of recipes such as stir-fries (Pad Prik Kaeng), Tom Yum Soups, spicing meats (Tod Man Moo), and of course for flavouring curries. Anyway, using a cleaver, the pumpkin is cubed and the pork is sliced, and we’re all ready to cook.

The coconut husks from earlier are used now, along with charcoal and kindling, to light the traditional fire stove. A simple metal pot is then placed on the fire and a cup, or so, of coconut milk is heated until boiling. The ‘Prik Kaeng’ paste is then added to the pot, then it’s the pork, and no long after it’s the pumpkin. The remainder of the coconut milk is then poured into the pot and the curry is left to simmer.

Note, this portion of the coconut milk is the first squeeze from the pulp, known as the ‘head of the coconut milk’. And it is rich in coconut oil and will almost always be used first in curries. And after a short time simmering, the coconut pulp goes through the sieve again for a second squeeze, this time known as the ‘Tail of the Coconut Milk’. The top of the pot goes on, and the Pumpkin Curry is left to simmer for around five minutes, before finishing with some palm sugar and fish sauce to flavour. It is then served with steamed jasmine rice, fresh from our fields.

But there will be limitations in our ability to ‘live off the land’, as we don’t exactly make the seasonings for the Thai Pumpkin Curry, like fish sauce, or palm sugar. And we don’t farm our own meat on the compound either. So we have to buy our pork in the small hours of the morning (06:00AMish) when the butcher sets up shop at the corner of the village. But there will never be a scarcity in rice, where the back house is packed to the rafters with rice farmed from the family’s fields.

A Potato in a Rice Field: In 2015 I spent a year living in a close-knit rural community in Northeastern Thailand (Isaan). I was based in the small village of Broken Road and ‘A Potato in a Rice Field’ chronicles my time there as I bumble through life, culture and etiquette within a strict family of tradition and Buddhist belief. Find it on Amazon here.