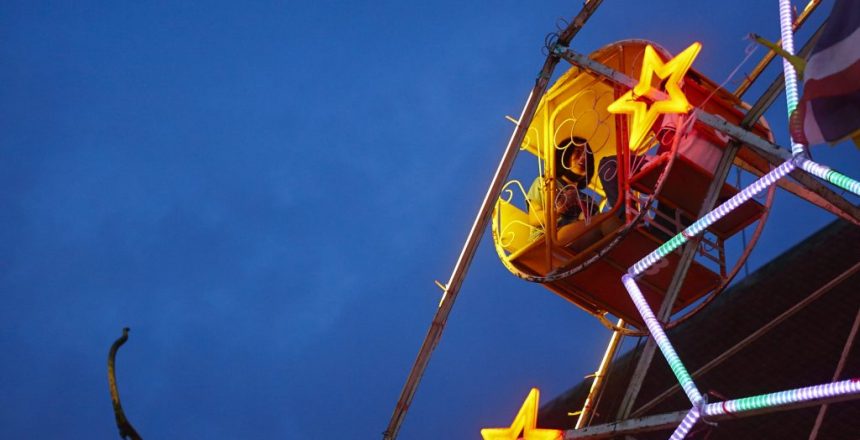 The sun was nearly setting when we arrived at the temple, just before the first lights switched on. A giant vinyl poster at the entrance read “Commemoration of our revered former chief monk. Donate to build a larger-than-life gold cast statue.” Upon entering the temple, the first thing we saw was a large round makeshift swimming pool. A few people were scooping up small plastic eggs from the pool with nets. Inside the eggs were pieces of paper telling people which prize they had won. Meanwhile, a monk wearing a yellow robe was talking through the loudspeakers, inviting people to donate for the cause and to buy game tickets, miniature Buddhas, and gold foil to rub on the Buddha statue. And he was preaching.

Walking through the crowded market’s hundreds of stalls selling food and candy, clothes and other items, we finally reached the temple carnival’s epicentre: the Ferris wheel and merry-go-round. The real fun started here. Cork-gun games, balloon darts, shooting galleries, ring toss, bouncy castle, freak show, haunted house, outdoor cinema, and dunk-tank girls next to the king of all shows: the “Wall of Death.”

The games and shows each had their own massive sound systems competing for the crowd’s attention. One man performing traditional southern Thai-style shadow puppetry with only a microphone and a small speaker was having a difficult time competing with nearby thumping Thai dance music from the dunk tank and Wall of Death. For a few seconds whenever the loud noises paused, we could hear the sound of monks praying in whispers through the main building’s windows.

The current set-up of temple carnivals we see today all over the country began around 80-90 years ago when Mr. Yuenyong of the “Yuenyongpanich” fair empire invented the first Thai Ferris wheel and merry-go-round, and later the Wall of Death. According to Mr. Yuenyong’s daughter, “Aunty Tim” (with a higher tone, “Tim” is a popular Thai lady’s nickname), the Ferris wheel was her very first childhood memory. Her father supplied the rides to other fair organisers around Thailand. They have since become a permanent icon of temple fairs. She is 70 years old now and still holds firmly onto the helm of her family’s legacy. She was selling Wall of Death tickets in a small booth decorated with star-shaped neon when I met her for the first time.

Although Thailand has always been a secular state, 95% of its population is Buddhist. Monasteries and the community are deeply interwoven in all aspects of life, from birth to death. Babies are commonly named by monks revered by their parents. Monks and temples have long been involved in coming-of-age ceremonies, schooling (temples were once the only place for boys to study), ordination, weddings, the purchase of new cars and houses, starting businesses, casting spells to disperse sickness or bad luck, and, at the very end, in cremations.

Ngan-wad (“temple carnival” in Thai) has a long history, likely dating back to the time Buddhism spread from India into Southeast Asia around 250 BCE, way before the advent of modern Thailand and other neighbouring countries. Empires in the region have long been built around Buddhist ideologies and agricultural societies, mainly rice farming, from the ancient Khmer to Sukhothai periods in the 13th to 15th centuries, to Ayudhya (1351-1767), and to the current Rattanakosin period, from 1782 to present.

In the olden days, after the cultivation period and monsoon season finished, people had more free time for their local temple, maintaining its physical and spiritual aspects. This typically started around November when the weather got cooler and extended to the end of summer in April before the rainy season began again.

Activities ranged from fixing ruined infrastructures to building new ones, and organising various ceremonies. This required support from all.  The wealthy donated money, the young men threw in their labour and construction skills, and the ladies took care of the more delicate craft work or prepared meals for everyone.

Kids hung around while their parents worked, so there were games for them, including spinning tops, building sand castles, riding wooden horses, having wooden sword fights and so on. Performers entertained the crowds with traditional dances, ancient plays, drum bands, pipe bands, floating poem duals, and puppet shows, among others.

Although Buddhist practices have remained fairly similar for thousands of years, the temple carnival has evolved throughout time. With the industrial revolution and the opening up of Thailand to the West, the change became radical. With advanced steel manufacturing, the invention of diesel engines and electricity, automatically driven rides became possible, and venues were lit up brilliantly with colourful bulbs in the darkness of night.

In today’s digital age, a new generation of organisers has established Nganwad.com (templecarnival.com), taking the carnival out of the temple compound to other places, including shopping malls, luxury hotels and company parties. Booking and planning can be done online, with prices and plans available in 3D for potential clients to peruse.

Technologies and Western cultures brought other changes, too. Rides and games were European and US fair wannabes. However, when mixed with ancient Eastern Buddhist traditions we created a new style of authentic Thai carnival. The Ferris wheel and other rides might look inferior to the Western originals, but that only made them more quirky and uniquely Thai. Although the Ferris wheels sometimes look frail and decrepit, there has—perhaps surprisingly—never been a reported lethal accident.

“Don’t you dare commit sin, or bad karma will come to get you!” At the freak show parlour, a young man was trying to lure the crowd through his megaphone. “Come, come—see the baby with a pin-hole mouth! He lied to his parents in his previous life, that’s why! Come see the girl whose legs became a fish tail! In her past life, she shouldn’t had fished in the temple pond!” And so on.

Some shows like monkey plays are very rare these days. It’s difficult to train monkeys and the income is not enough for the newer generation. Bumper cars, though always profitable, have been removed from many fairs because they often end in fights among teenagers. Outdoor cinemas are also increasingly hard to find. They take up too much space and everyone has their own screens at home nowadays.

At the main stage next to the church, about 20 girls in identical shiny micro-skirts were dancing in what seemed like a good old “Rum Wong” or traditional “circle dance.” There were two older ladies with a donation box at the foot of the steps leading up to the stage. Men put money into the box to enjoy a dance with the girls. The stage lights shifted from pink to green, yellow, blue and purple with the old church in the background. The sight was surreal. The outfits never would have been allowed in the compound if it wasn’t for the magic of the carnival. Forget the silky neck buttoned-up long sleeves with the ankle-length narrow skirts. They only exist in postcards.

Inside the Wall of Death, a small altar was set at eye level on a wooden pole. It held a Buddha statue, a sand cup holding incense sticks, a garland, a small glass of Thai white rum, a cigarette and a bottle of red Fanta. The maverick young stunt riders were praying for protection before they jumped on their deadly old-school two-stroke machines. Similar altars can be found elsewhere, too: by the dunk tanks, where girls in skimpy dresses were waiting to be dunked; under the corner of the movie screen; inside every game booth; beside show stages; and in food and clothes shops in the market zone.

Everybody needs a blessing nowadays, especially during this third COVID-19 outbreak. Nganwad.com received five cancelled calls soon after news of the outbreak emerged. Aunty Tim worries about everyone in her company if this goes on for much longer.

I went to say goodbye to her at the ticket booth. She was sitting in a chair behind a small counter. I knelt down on the ground so my head was lower than hers, as any Thai junior would do when encountering a senior at close range. I rested my hands on the counter and thanked her for keeping these fantasies alive. She reached out and gently patted my hands, saying with a kind smile: “Good luck with your story.”

On my way out, I stopped one last time in front of the Ferris wheel to have another look at it. The merry-go-round was on the right, the elephant carousel on the left, and the little cartoon trains were behind me. Kids were laughing, and parents were waving and snapping photos. Thousands of colourful bulbs were blinking, and the rides were circling round and round as though they were synchronised.

I’ve never understood my obsession with carnivals. I know everyone loves them and there is always a little kid hiding somewhere inside each of us. I just assume mine is a little bit more eager than average. I go to every carnival I knew of. I literally stop at every one I see. I’m not a religious person and I don’t go to temple in daylight except for funerals. I can only offer two possible explanations for this:

Religious: I was some kind of light-attracted insect in a past life. And the only purpose of my reincarnation is to constantly seek out lights and capture them with my camera.

Psychological: I’m a five-year-old trapped inside an ageing body. Something like Peter Pan Syndrome meeting a mid-life crisis. And all I want to do is run away from cruel reality back to eternal Neverland, at least for a few hours whenever the magical night falls.