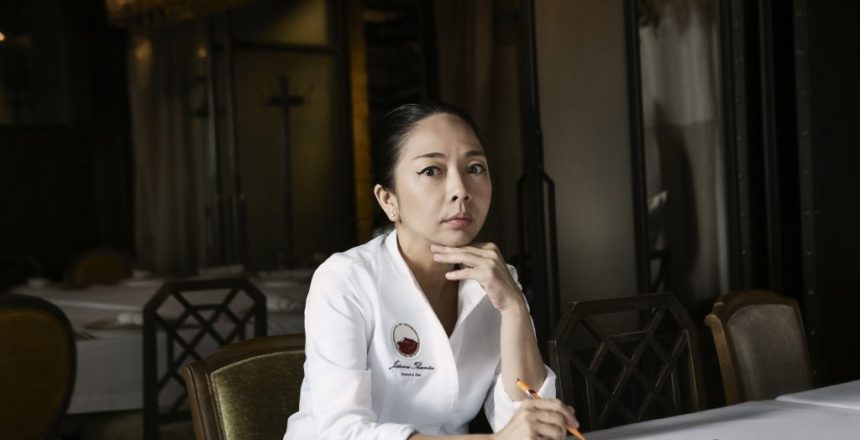 Chef Jutamas “Som” Theantae’s artistic and unconventional culinary approach informs the dining experience at Karmakamet Conveyance. Her cuisine knows no borders as it intricately weaves old-fashioned Asian fare with French techniques. Her tasting menu is designed to be explored with an open mind and without preconceived notions, and to stimulate introspective wonders. “Allow things to happen the way they are,” she says.

Som and her creative business partner Natthorn Rakchana moved the restaurant from Lhong 1919 to Sukhumvit Soi 49 at the end of 2019. The name, taken from their brand of perfumeries, is inspired by Kamet, a Himalayan mountain with pyramidal peaks situated in India’s Uttarakhand state near the Tibetan border between China and India. Both countries have influenced Indochinese cultures. Som’s Sino-Thai background and artistic training in West Bengal, India, echo these cultural roots.

Som and Natthorn coined the phrase “New Asian Cuisine” as their style, along with their mantra, “Truth in Taste,” which represents diverse and eclectic flavours with unrestricted formats or references. Their dishes derive from rich cultural traditions and fragments of memories inherited through generations, and are reconstructed with contemporary skills.

“I think that when you eat old-fashioned food, you close your eyes and feel the excitement. It needs time and sincerity to cook and I want people to feel that,” says Som.

The restaurant’s surrealistic décor includes an armchair and lamp sliced in half, and unfinished surfaces. Its tableware with half plates, contraptions and cutlery with absent prongs attract social media influencers and followers. Gone are Som’s drawings and sketches of destinations and emotions appearing in the “Appreciation” menu. Faux memento pieces of the “Expedition” adorn the tables such as graffiti from Long Island, New York in 1999; a rock with barnacles from a diving exploration in the Philippines; and bricks from an imaginary trip to Glastonbury, UK, in 2023.

Som’s third instalment of the “Expedition” menu comes by number, with neither art nor explanation, unless asked. Travel photos and videos narrate her journey across three continents: Asia, Europe and North America. She believes in the universality of aesthetics, cultures, places, races and languages that connect and transcend rules and boundaries. Through this lens, she delights in the appreciation of everyday beauty, from the clamour of Bangkok’s Pahurat alleys to the glitter and glamour of Paris and New York.

She says, “Life is an expedition. I take my time to go on expeditions in search of something consciously or unconsciously; to take in a moment, to stop and look, to go back to the same places, to cook, to dine alone and to do things in different ways. The fear slowly fades away when taking things as they come. I share with you my expedition through these dishes. Now, this moment, it’s all yours! Your time, your space, your thoughts. All is good! Enjoy your expedition!”

The first dish in the new 10-course tasting menu is a cherry covered in gelatine of amaretto. It is unassuming, fragrant and juicy.

The next three dishes open up the palate with concentrated consommé from pork rib, poured from a double-layered porcelain flacon. A single boiled peanut contrasts the broth’s intense flavours. Then a peanut butter cookie covered with a dense chilli paste of Indian spices tingle the taste buds. Fresh oysters, spicy seafood sauce gelée and a condensed steamed bun on an escargot dish round it out.

Then appears a squashed-up baguette filled with jambon and butter with a shot of red wine. The presentation here looks too artless and unsophisticated for fine dining.

One of the evening’s highlights comes as a breast or a thigh of pigeon, well roasted with curry of cha-om or climbing wattle leaves, chickpeas and herbed rice. Quail will replace this as the menu evolves with the chef’s adaptations.

Haricots verts, French green beans prepared in two methods: glazed in black sesame and in mustard oil and diced coconut meat are the vegetable interlude. The smaller portions would perhaps work better as accompaniments rather than their own course.

The fish course is sea bass, well-seasoned and seared, on ratatouille and perfectly prepared gratin dauphinois. A surprise arrives in the sauce made from young durian.

A shot of “Miracle Water,” Som’s father’s homebrew liquor or yaa dong, herb-infused Thai alcohol made from white spirits, cleanses the palate. It is vibrant, robust, and potent.

The signature main course of braised beef tongue is served with soft white tofu, sago pearl dumpling filled with caramelised peanuts and pickled radish, half of a fried crabmeat dumpling and a dash of sambal on thick handmade noodles tossed in soy sauce.

The dessert of sorbet, poached pear, and coconut macaroon on French vanilla custard is a delicious finisher. All dishes were paired with carefully selected wines from boutique wineries.

“Taste can be very subjective. It depends greatly on each person’s experience, upbringing and background. So the benchmark that we use in deciding which dish or menu is right to serve is love and happiness,” Som says.