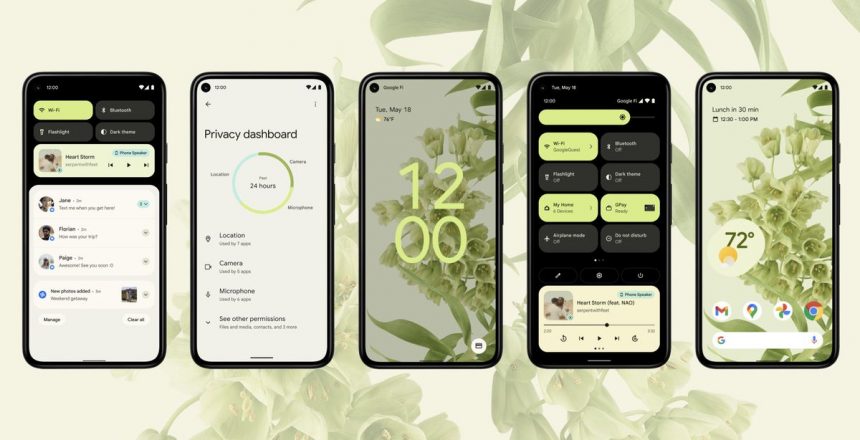 Google just finished its live Google I/O 2021 keynote, where the company unveiled a huge number of announcements, including a new look coming to Android, a bunch of features coming to its Google Workspace productivity suite, and even a new AI that talked as if it were Pluto.

Nilay Patel and Dieter Bohn followed the whole thing in real time right here on our live blog. But if you just want to get caught up on the biggest news from the show, read on for our recap.

Google revealed that Android 12 will have a brand-new “Material You” design with a whole lot of new changes. It offers a lot of color and customization, and the new mobile OS will even be able to change system colors to be able to better match your wallpaper. It also offers some new privacy features, including a new privacy dashboard. A beta will be available today, and it works with phones from 11 device makers.

Google announced “smart canvas,” a new initiative for its Workspace office software that will make it easier to work between products. Features include “smart chips” that let you link to other Workspace apps and the ability to start a Meet video call right from Google Doc, Sheet, or Slide.

Google CEO Sundar Pichai showed off some impressive (but pre-recorded) demos of someone having a conversation with an AI powered by its new LaMDA conversation technology. In the demos, the AI “talked” as Pluto and a paper airplane.

Google announced Wear OS (now called just Wear) and Samsung’s Tizen will be combined into a unified platform. That should lead to apps launching faster and longer battery life.

Google demonstrated Project Starline, which uses high-resolution cameras and depth sensors to create a real-time 3D model of a person who is “sitting” across you to re-create the feeling of having a face-to-face meeting.

Google is working on updates to its camera and imaging products to make them better at capturing and reproducing skin tones accurately in images.

Google Photos is getting impressive new “cinematic moments” that use two photos to create a moving image. You can see what they look like in the GIF above. Google is also adding new types of Memories, including ones based on visual patterns in your photos.

Google is adding a feature in Google Photos to let you store photos in a password-protected space on your phone. These photos won’t appear when you’re scrolling in the app. It’s launching first on Google Pixel and coming to more Android devices “throughout the year.”

Google announced that it’s adding a way to change a stored password for a website right from inside Google’s password manager. It’s rolling out gradually to Chrome on Android in the US and will be widely available in the coming months.

Google is making some changes to Google Maps, including rolling out new features for its Live View augmented reality tool. Google is also adding features to make maps more informative, such as showing different restaurants at different times of day, pointing out local landmarks if you’re visiting a new city, and showing how busy a certain area is.

Google is adding a number of privacy-focused features to Android, including a sandbox in Android, the Private Compute Core, that will securely store data used for machine learning.

Google announced that there are now more than 3 billion active Android devices. That’s a lot!

Google will let “select Pixel and Samsung Galaxy phones” work as digital car keys starting with Android 12. The feature supports UWB and NFC, though BMW is the only automaker confirmed to support Android’s digital car key so far.

Google revealed a new health tool that lets you take a photo of a problem skin area and answer questions about their skin type and symptoms to help you better identify skin conditions. Google aims to launch a pilot of the tool this year.