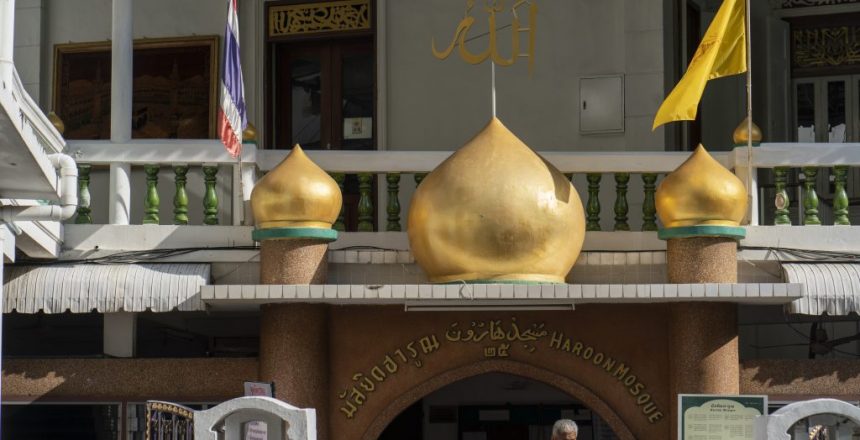 The writer and film critic Kong Rithdee talks about growing up in old Bangkok in the 1970s and how it’s changed since his childhood.

“I used to tag along with my mother and aunts to buy groceries in Bangrak Market,” says Kong Rithdee, reminiscing about life in Bangkok’s historic Bangrak District. “There was a huge wet market section where Robinson Department Store now stands.”

“Overall, though, the basic feeling around here hasn’t changed all that much since I was a kid,” he says, “Even though we’re hemmed in by tall buildings nowadays.”

Rithdee has promised to take me on a walking tour of the neighbourhood where he grew up, so we’ve met in front of his family home, a century-old two-story house where he was born 48 years ago. The house stands alongside the leafy, park-like graveyard in front of Haroon Mosque, one of Bangkok’s oldest Muslim places of worship. Though originally established in 1828 by Javanese Muslims, over the decades the neighbourhood attracted Muslim immigrant families from India, Pakistan, Bangladesh, Malaysia and Vietnam. Rithdee’s family hails from the latter, and they have lived on this site for four generations now.

Pointing to cement benches installed along paths threading between the graveyard’s tall shade trees and earthen funerary mounds, Rithdee notes, “Our neighbourhood allowed kids to use this area as a kind of playground. Then there were more solemn days when someone was buried and a funeral was held.”

I can’t help but wonder how Rithdee’s upbringing in this exotic quarter of old Bangkok may have shaped his career. As a staff writer at the Bangkok Post from 1996 to 2018, he reviewed close to a thousand films, and composed hundreds of columns on art, culture and politics. His last opinion piece for the Post was entitled “We need less ‘content’ and more journalism.”

Rithdee’s expertise on local, regional and world cinema is unsurpassed in the region, and he has been published in such respected film magazines as Cinema Scope, Variety, Cahiers du Cinema, and Sight and Sound. He first attended the Cannes Film Festival in 1998 and hasn’t missed a year since (other than 2020-21, when the fests were cancelled due to the coronavirus). Since leaving the Post, Rithdee has served as deputy director of the Thai Film Archive, where he’s engaged in both programming and film conservation.

During a quick tour of the mosque, a brick-and-plaster edifice dating to 1934, photographer Ian Taylor and I marvel at the upper-floor prayer hall, which makes beautiful use of wood salvaged from the original 19th-century Javanese structure, with its arched windows topped by delicately carved ventilators and, above that, verses from the Quran embossed onto the walls in yellow and green.

Out on Charoen Krung Soi 36, re-christened Rue de Brest in 2013 in honour of the French port city where Siamese emissaries arrived in 1686 to visit King Louis XIV, Rithdee leads us towards the river end of the lane. We pass the majestic colonial-style French Ambassador’s Residence, built around 1830 and still occupied by the current ambassador. It’s open to the public one weekend a year, during European Heritage Days in September. In 2014, the French ambassador awarded Rithdee with the Chevalier de l’Ordre des Arts et Lettres (Knight of the Order of Arts and Letters) for his in-depth film critiques and efforts to promote cultural diversity.

Facing the river near the ambassador’s residence stands the lane’s piece de resistance, three neo-Palladian buildings built in 1888 by Italian architect Joachim Grassi to serve as Bangkok’s original Customs House, collecting duties on all goods coming in or out of Siam by ship. After a larger port opened in Khlong Toey in 1949, the customs department moved and the classic buildings were turned over to employees of the local fire brigade and marine police, who live here rent-free.

“Wong Kar Wai shot several scenes for his films In the Mood for Love and 2046 here,” says Rithdee. “From time to time, I hear rumours of some big hotel group taking over the site, but so far nothing has happened for sure.”

Today the grounds are closed to outsiders, but we’re allowed in part of the way to view the buildings’ charming patina of decay, which make it a favourite location among fashion photographers, because the guards know Rithdee and his family.

From here we stroll to busy Charoen Krung Road, often said to be Bangkok’s first paved street (actually built four years after Straight Road, now known as Rama IV, in 1861). For most of the 20th century, Charoen Krung was a shopping hub for foreign goods and vibrant centre for hotels and bars — The Oriental and its Bamboo Bar, The Shangri-La, the British Dispensary, Chez Eve jazz club, Prom Photo Studio, and Central Trading Company. The latter morphed into the nationwide Central Group empire, which has recently opened Central: The Original Store in a modern building on the same spot as a museum, library and memorabilia shop.

Many of these businesses were still around when Rithdee was growing up in Bangrak in the 1970s. He points out where the British Dispensary once occupied a wooden building that’s been replaced by a row of jewellery shops in a modern shophouse. Just past World Tailor, the most upscale haberdashery in the area, we come to the parking lot-cum-schoolyard for red-brick Assumption Cathedral, built in 1809. “The community here has always been a mix of different religions – Catholics, Muslims, Hindus, Sikhs, and Buddhists,” he notes. “Bangrak was easily the city’s most cosmopolitan district before Sukhumvit took off in the late 1980s and 1990s.”

Bangrak’s recently designated Charoen Krung Creative District now boasts the Thailand Creative and Design Centre in the original, Art Deco-style Central Post Office building, along with a handful of studios and art galleries in small alleys. Asked whether the designation has brought change to his neighbourhood, Rithdee says. “I’m seeing a lot of new cafes, most of them opened in the last two or three years. But are creatives swarming in? I don’t see it, not so far anyway.”

Rithdee professes strong memories of Panlee Bakery, near the intersection of Charoen Krung and Silom. We pass through its vibrant red doorway for a look. Over a display of Euro-style pastries, a sign boasts “Eclairs Since 1950.”

“Back in the old days, this was the only Western bakery in the neighbourhood,” Rithdee says. “Panlee was highly respected for its bread, and for kids it was just about the only place you’d find fresh-baked cookies.” As we leave, a cashier mentions that Panlee only added air-conditioning (and an espresso machine) in 2008 to keep up with the times.

Further down Charoen Krung, we pass 60-year-old Jok Prince, a favourite of food bloggers for its luscious rice congee, and then dive down the adjacent alley. Rithdee’s future as a film critic may have been forged here at Prince Rama Theater. It was originally opened in 1912 as Royal Casino, where punters played games of chance while watching an all-male Chinese opera troupe. Next door were a brothel and an opium den.

“My aunts loved sticky rice and mango, so I came here a lot as a kid,” says Rithdee as we pass Boonsap Khun Luang (Boonsap Thai Deserts) on Charoen Krung near Robinson Department Store. Lucky kid. Since opening in the1940s, the shop has perfected a recipe of thickened coconut cream, mixed with Chiang Rai sticky rice, that many aficionados consider the best in town.

Before we leave Rithdee near the BTS Saphan Taksin station, I ask what he thinks about the movie business in times of corona. “At first Hollywood kept pushing back production dates in hopes of an early end to the pandemic,” he says. “The entire industry came to a halt. But now at least some films are back in production [with accepted health protocols], and with cinemas in many countries now open, at least there’s something of a market. “It won’t be the same for a long time, I imagine. It’s a good time for restoring and re-releasing historic films.”