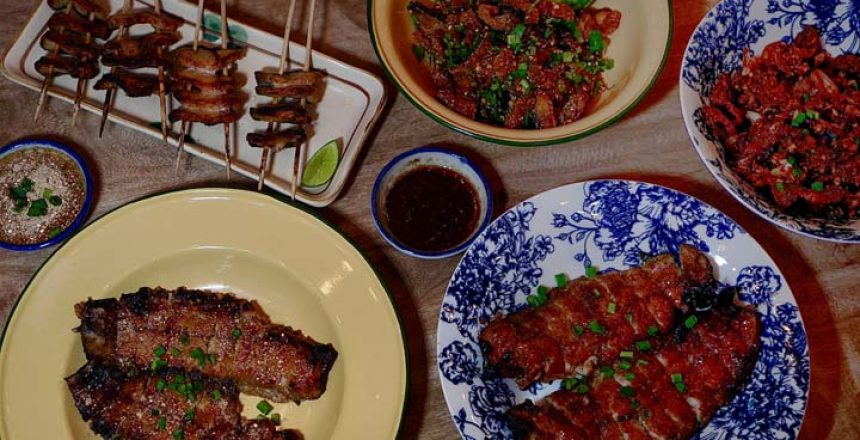 Catfish is one of those local ingredient foodies either love or hate; some give it ‘a pass’ due to its appearance or the fact that Catfish is one of those species that eats everything, giving the meat a distinctive smell that some foodies swear off. While you’ll find Catfish at Isaan street food stalls and hidden home kitchens, the ingredient is still hard to come by in a proper restaurant setting. Whether you’re catfish’s biggest fan or a skeptic eater, you’re in for a surprise at Dukemunk, a new Ekkamai Eatery who finally gave this humble streetside snack a gourmet-plate worthy upgrade.

Hidden inside of a multi-store project, Willy’s Next Door in the back street of Ekkamai, Dukemunk’s share their kitchen and dining space with Japanese kitchen, Miyagawa. The dining space almost doesn’t look like a restaurant at all, but gives out the feeling of going to a friend’s house to have a meal. To eat here, foodies need to make reservations ahead of time as Dukemunk wants to serve the freshest fish possible.

The name of the shop, Dukemunk when translated into Thai means “maybe it’s a catfish”, a cheeky spin to the cooking concept of the restaurant. “I chose this name for the restaurant because once the food is cooked and served, it doesn’t look like a normal catfish at all,” laughed Thanet “Dokfin’ Subsart, owner of Dukemunk. “I wanted people to be more open minded when it comes to catfish, there is more to the ingredient than what you see on the street stalls,”

Dokfin puts a lot of care into each step of cooking at Dukemunk, from using 2 different types of catfish for cooking and prepping the fish so it gives out less of the distinctive smell. “We marinate the fish in lemongrass, which helps to get rid of the catfish-y smell a bit, then it’s ready to be cooked,” said Dokfin.

Indeed Dukemunk’s treatment of catfish is something we have not seen before, take their signature menu, the Grill Catfish for example. “We actually use Japanese method of cooking the catfish over charcoal and brushing the fish with special homemade sauce,” said Natcha “Noei” Wareerattanaroj, Dokfin’s partner at Dukemunk. The end result gives the catfish slightly smokey flavour and juicy, melt in your mouth texture, surprisingly similar to Unagi. Foodies can choose between having the catfish with a spicy Jim Jaew Sauce or Lemongrass Shoyu Sauce.

Other menu include Thai-style Grilled Catfish, where the catfish is more crispy and thin along with a twist on, classic Thai style cooking such as Crispy Garlic Stir-fried Catfish or the more familiar, Catfish Larb where Dukemunk has taken a different turn on this classic dish by using fried Catfish instead. All of the menus are perfect for sharing over steamed rice and refreshing drinks.

Want catfish at home? Dukemunk also runs a delivery service on all of their menu as well, just send them a message ahead of time on Facebook!

Want to get noticed?! Get in touch with the Foodies Marketing Specialist.

Check out what foodies are currently eating: https://www.bangkokfoodies.com/

Promote or Advertise with us: [email protected]