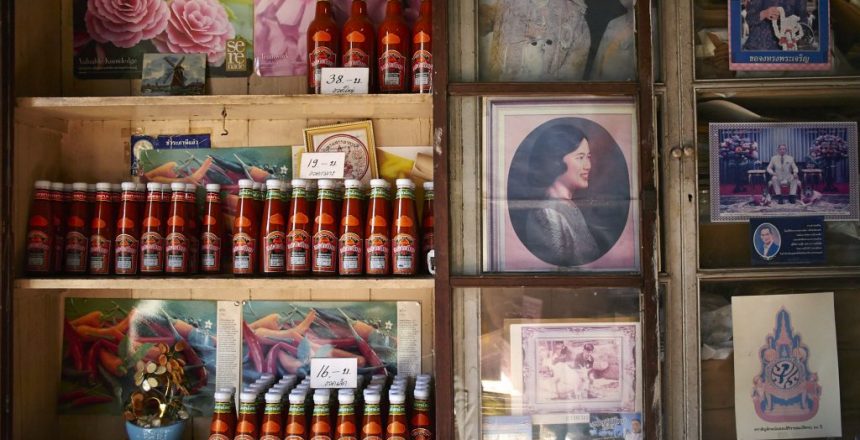 The legend of the world’s beloved chilli sauce. First launched in 1932, ‘Gold Medal’ Sriracha sauce carries on with the original recipe.

My only knowledge of Sriracha chilli sauce is that it’s magically delicious on anything. And that it’s a must-have in every kitchen. All Thais grew up pouring it on top of golden-brown omelettes over steamy jasmine rice. There are so many different labels to choose from. The most familiar one shares a name with a seaside town not far from Bangkok: “Sriracha.”

“Time Capsule” could be a term invented specifically for this place. The approximately 7×7-metre space is filled with stuff from over a century ago: carved wood cabinets, book shelves, old posters and photographs from former eras, stacks of yellow pages and piles of souvenirs.  The building itself is over 150 years old and the original elements are all still intact, from the chunky limestone floor to the brick walls and old wooden ceilings.

Mr. La-Kud was by himself, just about to have noodles at the desk when we stepped in. I apologised for interrupting his late lunch (it was 2:30 pm) and told him we could come back in 30 minutes. He put his bowl aside and insisted we get going right away. He didn’t want us to wait around. At 83, he’s in good health and very sharp. During our interview, he paused every once in a while to greet walk-in customers with a warm smile and to pick up the telephone for orders.

“Uncle,” as I called him, began his story by taking us back to when his grandfather was a prominent goldsmith, working for King Rama IV in the royal palace not far away. His grandfather acquired the building on the new “Fueng Nakhon” Western-style road (one of Thailand’s first three roads), which was completed in 1864. The Ratchabopit royal temple across the narrow road where “Uncle” ran around growing up with his nine siblings was built five years later, in 1869, during the period of King Rama V.

Uncle was born in 1938. His father was a high-ranking civil servant in the Department of Irrigation. He met and fell in love with his mother while on assignment in the seaside city of Sriracha, her home town, about an hour’s drive from Bangkok. This is where the history began. Sriracha is famous for its seafood and its chilli plantations. His mother often ground her own chilli sauce for dipping fresh catches when friends visited. The sauce was so good her friends encouraged her to sell it so the world could have a taste. Until she got married to Uncle’s father and moved in with him, a little factory was set up in the back kitchen. The sauce was bottled for sale under the brand “Sriracha” to restate where it came from.

The sauce first launched in 1932. That same year a group of military men and civilians staged a coup that changed Thailand from an absolute monarchy into a democracy with the King as head of state. The new democratic government organised an annual celebration to commemorate the revolution. A sauce competition was among the event’s many highlights, and as the history goes, Sriracha won the gold medal repeatedly—more than 10 times in total. That’s where the famous tagline “Sriracha – Gold Medal Brand” and the medal logo come from.  Those original medals exist somewhere under the piles of souvenirs in the blue cabinet in front of Uncle’s desk. I asked if we could pull them out to have a look and he said it wouldn’t be possible to go through everything in there.

Uncle’s been helping his parents in the family business since he was young. He helped his dad boil the sauce, and pack and deliver it to customers. He took full responsibility for the business immediately after he graduated from college (he majored in accounting).

“That’s the only thing I ever wanted to do,” he said.

He always kept the business a family one. He never thought about expanding or simply trying to generate the most profits from his product. Whenever orders got to be too much to handle, he just stopped taking new ones and continued to do things at his own pace. He still glues labels onto the bottles himself.

The fresh chilli he uses come from the nearby Pak Klong Talad by the Chao Phraya River: “Prik Che Fah” for the mild-hot recipe and “Prik Khi Nhu” for the extra-hot one. Other ingredients include fermented garlic, white sugar, vinegar and sea salt. There are no chemical substances, flour, MSG or food preservatives. There are three bottle sizes: small 150 ml. for 16 baht, medium 300 ml. for 19 baht and large 500 ml. for 38 baht.

You might not find Uncle’s Sriracha in a Google search if you forget to type “Gold Medal brand.” There are a few other Srirachas around, since many families in the seaport town make their own sauce. The one that sells best in Thailand, with full-on industrialised production and distribution to every supermarket shelf, is the “Sriracha-Panich,” which is probably as old as Uncle’s Gold Medal. Sriracha-Panich became the “original” Sriracha sauce to Thais. If you only type “Sriracha sauce” on Google, the Sriracha Rooster with a green cap from California will be the only Sriracha to pop up on your screen.

The Rooster brand was established around 40 years ago in Los Angeles by a Chinese-Vietnamese US immigrant. David Tran was a sauce-maker in Ho Chi Minh City, in southern Vietnam, before fleeing the war aboard a cargo ship to the US in 1976. Though the name he chose for his brand is the identical “Sriracha,” he denied copying the taste and ingredients from the one in Thailand, and insisted he was just impressed with the scenic seaport town, which he passed through en route from Vietnam to the US. Sources believe he had a taste of the Thai Sriracha sauce, which existed in Vietnam, before he left. He used a Mexican jalapeño pepper, which commonly grows in the region, as the main ingredient for his version.

His Rooster brand has been a powerhouse in the US for over a decade. Bon Appetite magazine awarded the Rooster brand the best sauce of 2009. A famous chef wrote an entire book on cooking with Sriracha Rooster sauce in 2011. There is a documentary film on the Sriracha Rooster, T-shirts, Sriracha lollipops, chocolate bars, popcorn, chips and probably even some photos of the Sriracha Rooster floating around in a space station somewhere in the galaxy. Since 2014, the Rooster has sold over 20 millions bottles yearly, ranking it among the top 5 in the 50-billion-baht global sauce industry. The great Heinz even made its own version of Sriracha sauce to join in the race.

The “originality” of Sriracha sauce made headlines in 2019 when the Rooster brand was imported to the Thai market. Though the Thai Sriracha originated at least 50 years earlier than the Rooster, the latter is far more well known internationally. The Thai Sriracha Panich has been in the US market for a while but hasn’t been able to take much share from the Rooster. The Americans consider the Rooster the “original” while Thailand’s Sriracha Panich is dubbed “original” only among Thais and other countries in this region.

Of all the information circling around the internet, few people ever mention Uncle’s Gold Medal brand. Uncle doesn’t use a smart phone. We reached him through his home number. There was no computer on his desk (only a newspaper), and two old televisions, which weren’t on. I asked if he knew anything about the originality debate between the two major Srirachas. He said he’d heard of the US Rooster brand but has never seen a bottle of it before. And as for who came first among the Thai Sriracha makers, he said he wasn’t sure because that happened before he was born. He pointed to old hand-painted evidence: an original Sriracha Gold Medal poster from the 1930s when it first launched. Written on top was: “The First Flavourer of Siam,” (Thailand’s former name).

That triggered a question I’d never really thought about before. What truly defines “original?” Is it: “Who came first?” Is it: “Who is most famous?” Or is it: “Who is the most successful in the business?” The line between “inspired” and “copied” is subjective, not to mention thin and blurry. No matter what, both play important roles in the evolution of everything. The world of chilli sauce is no exception.

The Aztecs in South America were growing chillies and making their own sauces for thousands of years before the European conquerors arrived. They took the chillies back and mixed them with their own produce, like onions and other spices, to make their own. Tabasco put their sauce in a bottle and made the name global. The Europeans carried with them those Aztec chillies and spread them all over Asia. Whoever came up with the first Sriracha was probably inspired from somewhere or someone else… somehow.

We said goodbye. On my way out, I thought I should make portrait prints for Uncle since there is no other channel by which I could share him his own legendary story. I looked back inside from across the street as Uncle walked back to sit behind his desk. All by himself in his time capsule, he put on his thick glasses, grabbed a bottle and continued gluing those labels.