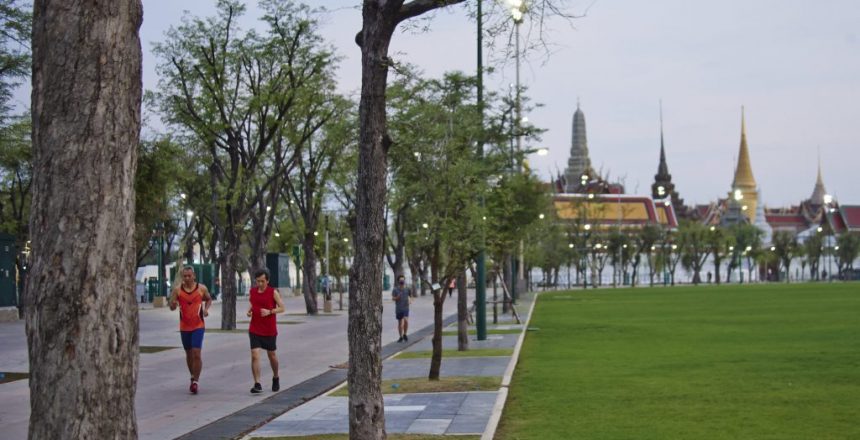 City running is among the best exercise options right now since it is allowed and relatively safe to be in open-air spaces. Though Ratchadamnoen is not as vibrant as it used to be, it remains full of charm, with beautiful structures from different eras to explore.

Like the Champs-Élysées in Paris and The Mall of London, Ratchadamnoen Avenue in Bangkok is the most elegant and charming street in the Thai kingdom. It features a wide-open drive lined by rows of tall tamarind trees, grand temples and palaces, art deco buildings and hotels, marble bridges and historical monuments. This roughly three-kilometre route is rich in history. It has been a central point of ever-changing phases throughout the country’s evolution.

There are three parts of Ratchadamnoen (meaning “The King’s Route”): The inner is 525 metres long, starting from the northeast corner of the Grand Palace, passing by the Sanamluang Royal Field to the Rattanakosin Hotel. The middle section is 1.2 kilometres, from the hotel past the roundabout at Democracy Monument until the old Mahakarn Fort, before crossing over the Bang Lamphu canal. The outer section is 1.5 kilometres from the fort, passing the UN head office at the Makkawan Rungsan bridge and continuing to the other end at Dusit’s marble Ananta Samakhom Throne Hall.

King Rama V initiated this road project to connect the old Grand Palace to the new Dusit compound that he had just built for his family. Construction started in 1899. It took four years to complete the three parts, and was finished in 1903. The design and concept was inspired by the great Champs-Élysées and The Mall, both of which the King had seen during his first European trip two years earlier.

The Ratchadamnoen project happened at a very crucial time for Siam (Thailand’s former name) because it wanted to reposition itself as a modern civilised state in order to survive the imminent threat of colonisation from both the British to the west (in Burma) and the French to the east (in Indochina). After neighbouring countries fell into the hands of Western conquerors, ambitious construction projects were rushed ahead, both to solidify the country’s unification and to push an image of a civilised nation on the world stage. Projects during King Rama V’s reign included the railway system, with the Neo-Rennaissance Hua Lamphong train station (1910) and the grand marble Ananta Samakhom Throne Hall (1908), which was inspired by the Vatican’s Saint Peter and London’s Saint Paul Church.

Bangkokians had no idea what a proper road and automobile should look like. The city was established 239 years ago in 1782 by King Rama I and was then connected by a web of canals. Travel by boat was the primary mode of transportation. Residents lived in houses and rafts alongside the rivers and canals. Foreign visitors in the olden days dubbed Bangkok the “Venice of the East.” There were a few Western-style paved roads built in the period of Rama IV, but none of them had the same grandeur as the great Ratchadamnoen. The Westernisation and modernisation strategy was apparently successful. Thailand is the only country in region that avoided colonisation.

Ratchadamnoen evolved slowly from its early days. There were rows of mahogany along the middle part of the road with benches and lamp posts (electricity had just been introduced). The few structures alongside the road were from the previous eras. The Grand Palace, Wat Phra Kaew, the Royal Field, Mahakarn Fort and the first two canals are from the Rama I period. The golden mountain behind the fort and the metal pagodas at Wat Ratchanadda across the street are from Rama III. Ratchadamnoen and the three bridges, the Dusit Palace compound, the Throne Hall and the monument of Rama V on horseback are all from his own period.

After the 1932 revolution by a group of military men and civilians that turned the country from an absolute monarchy into a democracy, with the king as head of state, Ratchadamnoen came fully alive. Rows of modern Bauhaus commercial buildings replaced the trees on both sides of mid-Ratchadamnoen. From the elegant Rattanakosin Hotel, Parisian-like cafes and restaurants, newspaper offices, the Chalerm Thai cinema, law firms, insurance companies, car dealers, barber shops and all kinds of businesses sprung up as the city embraced the new ruling system. Democracy Monument was finished in 1940, marking the turning point in the country’s political evolution.

The outer Ratchadamnoen is where all major government departments were built, including the ministries of Agriculture, Transportation, Education, Tourism and Sport, along with the Army Headquarters, Government House, UN Head Office and Ratchadamnoen Boxing Ring. The outer section is especially suitable for runners since it features a wide footpath on both sides, with rows of shady tamarind trees along the 1.5-kilometre stretch.

Running on this romantically charming route today, no one would imagine that just over 200 years ago, when the city was first established, this whole area was nothing but bushes and swamps. The first few settlements were for slaves in rattan shacks outside the palace’s walls. The previous Chinese residents were pushed south toward what is now China Town. Sanam Luang witnessed cremations of royal bodies before turning into a rice field during Rama III’s reign. The great yellow Neo-Palladian Defence Ministry by Rama V was once a royal rice-storing shack just outside the palace. The whole area regularly flooded during the monsoon season.

Rama III opened trade with foreigners so the city started to expand while the Chao Phraya River filled with steam cargo ships. Expatriates, merchants, diplomats and missionaries from all over the world settled in the city, bringing new knowledge and technologies. The first “Charoen Krung” Road during Rama IV was suggested by Western expats who needed a place to ride their horses and for recreation. Rama V imported the country’s first automobile when Ratchadamnoen was completed. His convertible Mercedes Benz 28 HP was the first and only motorised vehicle cruising up the brand-new avenue. Later, cars became more popular and accessible to the public. Canals were paved over by roads. The days of its reputation as the “Venice of the East” eventually ended.

The city will turn 240 next year. Ratchadamnoen is about half as old, at 120. It’s witnessed every crucial event this country has experienced, both glorious and tragic. A year after Ratchadamnoen was completed, Rama V abolished slavery. The country was heading toward a new era with a free population receiving an education, together with new ideas like freedom, human rights and equality that poured in from the outside world. The Throne Hall, which signified the height of the previous era, became a central scene when Thailand switched to a new path of governance during Rama VII’s reign. Some 40 high-ranking officials in the royal government were detained inside while the coup-stagers read their declaration of democracy in the square out front.

Major changes to the “The King’s Route” happened soon after. In contrast to the sophisticated palaces and temples, the bold and plain Bauhaus buildings constructed along the middle of Ratchadamnoen by the new civilian government corresponded to the concepts of non-hierarchy and equality of the people. The period coincided with WWII, which eventually led the country to become a fascist military regime for decades. The Japanese marched through Ratchadamnoen on their way to battle the UK in Burma. The main church in Wat Phra Kaew was where the Thai prime minister signed an agreement with the Japanese. A “Free Thai” anti-Japanese movement flipped Thailand’s status to become a winner at the end of the war after the Japanese surrendered to the Allies. Thai troops went on a victory march alongside the British past Democracy Monument.

The Cold War strengthened Thailand’s military regime, with US support to fight against the looming Communist threat from neighbouring Indochina. A series of student-led protests against military dictators took place on Ratchadamnoen and ended in bloodshed.  Black and white footage and photographs show hundreds of thousands flocking to the monument and along the avenue. Helicopters hovering above the street sprayed down M16 bullets on student protesters in 1973. Students accused of being Communists were massacred by paramilitary men at Thammasart university in 1976. A few of them were hanged from the trees and burned alive by outraged right-wingers around the Royal Field. Protesters were shot dead in front of the Rattanakosin Hotel in 1992 while camouflaged officers smashed someone’s face on the steps with combat boots in the lobby.

The assassination of Rama VIII in 1946 took place inside the Grand Palace complex. Thais took to Ratchadamnoen to express their love and respect for Rama IX throughout his 70 years on the throne. Crowds would line up along the route whenever his motorcade passed. He appeared on the balcony of the Throne Hall in 2006 on the 60th anniversary of his coronation in front of hundreds of thousands of supporters packing the square and farther up the outer route, chanting “Long Live The King.”  When he passed away at 88 in October 2016, more than 12 million people lined up in black dress day after day, paying respect to his body, which was inside the main palace’s hall during an 11-month official mourning period.

Ratchadamnoen has never stopped being the epicentre of significant events, especially during political conflicts. Factions have continued to take turns occupying this peaceful and serene avenue over the past 15 years, from the yellow shirts to red shirts, green shirts (soldiers in their tanks), whistle-blowers and the recent three-finger-salute student movement. Amid the COVID-19 pandemic, Ratchadamnoen is witnessing yet another challenging moment.

Ratchadamnoen has been quiet since renovation work began a few years ago. Businesses along the Bauhaus rows were closed and all shop signs were removed. The facades of those buildings will be changed into the neo-classical style similar to those during the Rama IV and Rama V periods. Two major galleries are closed due to COVID-19. Rattanakosin Hotel sits empty because there are no travellers.  McDonald’s at the roundabout is open for take-away only. The square in the middle of the Royal Field, which used to be crowded every evening with young skate-surfers, is now abandoned due to the latest outbreak.

The pandemic will be with us for a while. We have no other choice but to adjust ourselves to get through it. Public parks and gyms are closed. Street running seems to be the best option for runners since it is allowed and it’s relatively safe to be in open-air spaces. Though it’s not as vibrant as it used to be, Ratchadamnoen is still full of charm, with beautiful structures from different eras to explore. The avenue enjoys heavenly light in the late afternoon, shady rows of trees, a wide-open runway and fresh air to breathe. And its epic history is there waiting to be told every step of the way.