VERY BANGKOK: The Most Primate City 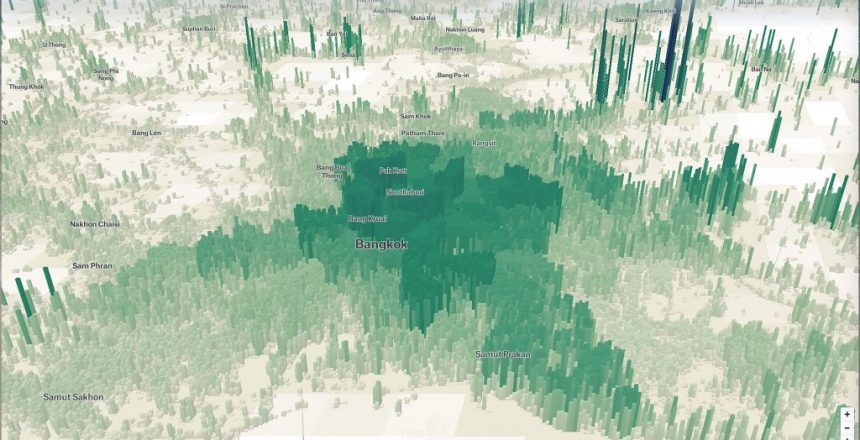 Bangkok dominates Thailand’s hinterland to a greater extent than does any of the world’s other “Primate Cities.” Let us count the ways in which the Thai capital monopolises the country.

A new column by Philip Cornwel-Smith relates to his latest book Very Bangkok: In the City of the Senses.

Bangkok is the centre of the universe. Not on every map, perhaps, but the Old Town is itself a mandala – a physical and mental map of the Hindu/Buddhist cosmos centred on the symbolic representation of sacred Mount Meru. Today’s capital inherits that mindset. Those closer to power gain more status, lending Bangkokians an aura of exceptionalism over the Thai provinces. For nearly a quarter millennium, the country has revolved around what the capital wants. That’s a core issue in Thailand’s social and political tensions.

So just how overbearing is Bangkok? When one giant conurbation dwarfs a country’s secondary cities, it’s known as a “Primate City.” Bangkok is more primate than any other world city, dominating its hinterland in every respect. While most countries base many flagship functions upcountry, Thailand centralises everything. It’s the epicentre of all national life: royalty, religion, government, military, business, banking, property, media, education, arts, entertainment and shopping. All road, rail, air and boat transit are spokes radiating from this hub. One reason Bangkok is so hard to manage is that it tries to do too much.

The numbers are extreme by global levels, far exceeding primate cities like London or Paris. With 17% of the population, Bangkok makes 26% of GDP, but takes 72% of public spending. It surely takes a similar gulp of private investment, tourist spending and the black economy. Many functions require large areas in huge quantities like 26 palaces, 32 universities, 88 golf-driving ranges and nearly 900 temple compounds – causing its residents to be squeezed into denser living space.

Cosmologically, the Thai capital is where the King sits. Bangkok has several working royal palaces, such as Amorn Sathan, Chitralada, Sukhothai, Sra Pathum, Thawi Wattana, Chakri Bongkot and the Grand Palace. These cover large city blocks, in addition to royal piers and other facilities, plus about 20 former palaces with new uses.

Decentralisation has moved many bureaucracies to the suburbs (but not to the provinces) like the huge Government Complex on Chaengwattana Road and the new Parliament in Kiakkai. Soon the BMA will move its City Hall to the suburbs. Historic ministry buildings remain intact for museums and functions.

The armed forces all have HQs here and vast installations inside the city, though some are due to decamp outside. The navy dominates the river with several dockyards, a showpiece conference centre, the Navy Club, and the royal barge sheds, plus a massive enclave in Sathorn. The army holds swathes of northern Bangkok filled with barracks, tanks, playing fields, a stadium, and command centres. The air force has half of Don Meuang Airport. The country’s major prisons are also here.

Thai Buddhism is run from the Old Town, while the city also has two Buddhist universities, the 40-hectare Putthamonthon Dhamma Park, and around 900 temples. It also hosts the Thai headquarters of Sunni, Shi‘a, Catholic, Protestant, Hindu, Sikh and other religions. Each temple has far larger sanctuaries than do most churches or mosques, due to their historical multi-function roles as a community centre, school, hospital and festival ground.

Fulcrum of the country’s road, rail, air and river traffic, Bangkok conveys 95% of Thai import-export, and still has a port that receives ocean-going ships and tankers to two oil refineries, although most containers go to Laem Chabang in Chonburi. It has two airports: Suvarnabhumi is one of the world’s biggest in ground area and a regional hub, while Don Meuang has been the world’s busiest budget airport.

Heavy industry has moved to the Eastern Seaboard, but countless factories remain around the capital, which has the country’s main wholesale markets, banks, finance houses and corporate HQs. It boasts several of the world’s biggest malls and markets, such as Chatuchak. Most trade fairs are held at the capital’s MICE facilities, notably the giant exhibition and conference centres, Impact and BITEC. While Phuket is the wealthiest province per head, the rich all have homes in Bangkok, which has the priciest property, the highest salaries and the biggest loading on the minimum wage. It has the greatest surplus of abatements and land banks, yet also the biggest slum, Khlong Toei.

Being surrounded by closed countries in the Cold War made Bangkok a draw for NGOs and foreign institutions like UN ESCAP, UNESCO, ILO and SEAMEO-SPAFA. The US Embassy is its third biggest embassy in the world, after Baghdad and Cairo, with half of its staff covering non-Thai matters and several compounds, including the joint military command JUSMAG. Overall, Bangkok has among the highest populations of expatriates among world cities, and most of the expats who call Thailand home.

Bangkok has 90,000 hotel rooms for the 32.6 million annual total of tourists who were visiting pre-Covid in what had since 2016 been the world’s most visited city. It’s also a world medical tourism pioneer, with massive private hospitals. Most Thai medical training is done in Bangkok, especially at Siriraj, the world’s fourth biggest hospital. And now in Thailand’s third wave of Covid-19, it has by far the most infections – and naturally the priority in vaccination.

A much proclaimed goal in Thailand’s democratic periods has been decentralisation. Then the centralising impulse of repeated coups keeps resetting the process to restore Bangkok as the command centre for micro-managing Thai life. And yes, you’re reading this in Bangkok 101!

Credit: This column is syndicated by River Books and relates to topics in Philip’s latest book, Very Bangkok: In the City of the Senses.