Google Workspace and Google Chat are officially available to everybody 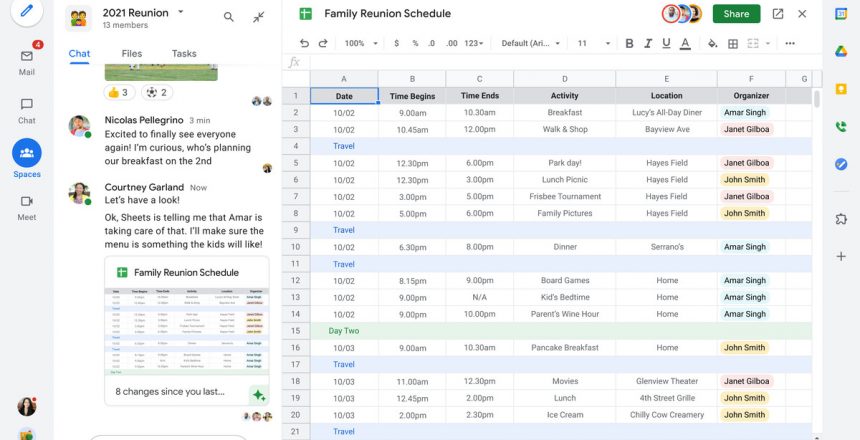 Google is announcing some changes to its Workspace suite of apps and services today, including availability for anybody who has a Google account. Google says that there are over three billion users of its Workspace apps — though it’s probably a safe bet that Gmail accounts for a healthy chunk of that userbase.

A lot of people will soon have the option to switch over to Google’s more modern system for Gmail, Docs, and Chat. All of them can be integrated in a single tab more easily, for example with chats sliding over to the left to reveal a shared spreadsheet. It’s also related to the company’s new “smart canvas” push, which is also designed to interlink its various apps via “smart chips.”

To get started, Google is now officially offering the setting to turn on Google Chat to all users. It’s a new setting within Gmail.

With the switch, Google Chat messaging should be an option for all now, which can include direct messages and chat Rooms. But Google is also introducing a new terminology to go along with the announcement. It is announcing the “evolution of Rooms in Google Chat to Spaces.”

A Space is essentially the same thing as a chat Room, but Google wants to separate them out into their own top-level form of communication next to Gmail, Chat, and Meet. Google is layering on a few new features like improved message threading, more emoji reactions, user roles, moderation tools, and “discoverable” spaces. In that sense, it seems that Spaces wants to serve both as a Slack competitor and as a competitor for public Discord groups and, well, maybe as an optional replacement for email groups.

It’s a little confusing — but that’s par for the course for Google’s messaging strategy.

The key idea, according to Sanaz Ahari, senior director of product, is that users can more easily switch between “modalities” of communication. The intent is to “keep the context,” Ahari says. “If you start something with an email and then you want to upgrade it into more real-time interaction between a group — or even for a project — you’re able to do that and you can keep the context. Then you can all seamlessly upgrade into a meeting at the same time.”

Google is promising it will “launch a streamlined and flexible user interface” for Spaces this summer.

Those aren’t the only announcements getting bundled into today’s Workspace news. The company is launching a new tier called “Google Workspace Individual” at $9.99 per month, which gives users more Workspace tools without requiring them to set up their own domain or custom email address.

When Workspace users say yes to a meeting, they will be able to indicate whether they’ll be attending remotely or in the reserved meeting room. Google also provided a date for the Companion Mode feature, which encourages people in the meeting room to also turn on their cameras so that remote workers don’t feel quite as left out — it should be coming in September to desktop and “soon” to mobile.

Google also snuck in an announcement that it will finally offer a progressive web app for Google Workspace in September. In theory, it could make it much easier for Gmail users to have their email and other Google apps feel more like actual desktop apps and not just tabs in the browser. That’s possible now via various Electron apps and Single Site Browser windows, but it requires more work than it should.

Finally, Google is adding enterprise options that are going to be necessary if it really wants to have a shot at going after larger companies. Corporations will be able to use their own client-side encryption for data, add more “trust rules” for various Drive files to simplify access and permissions, and label files based on their sensitivity.

Google Workspace has been rapidly updating and iterating over the past few months, a sign perhaps that the company really does intend to seriously compete with Microsoft. Google’s strategy goes beyond just improving its products — it’s more tightly integrating them together. Gmail users will soon find more prompts than ever to bring them into Google’s other Workspace products — and some no doubt will be looking for ways to avoid all that. Putting buttons for Chat, Meet, and Rooms (soon to be Spaces) at the bottom of the most popular email app in the world is sure to raise usage — and potentially some antitrust eyebrows.

The biggest question mark is whether Google can coherently explain the switchover to Chat, why it’s worth it, and what this new Spaces thing really is. Now that Workspace is going to be available to over three billion regular people, the company is going to need to work hard to clearly communicate with all of them.