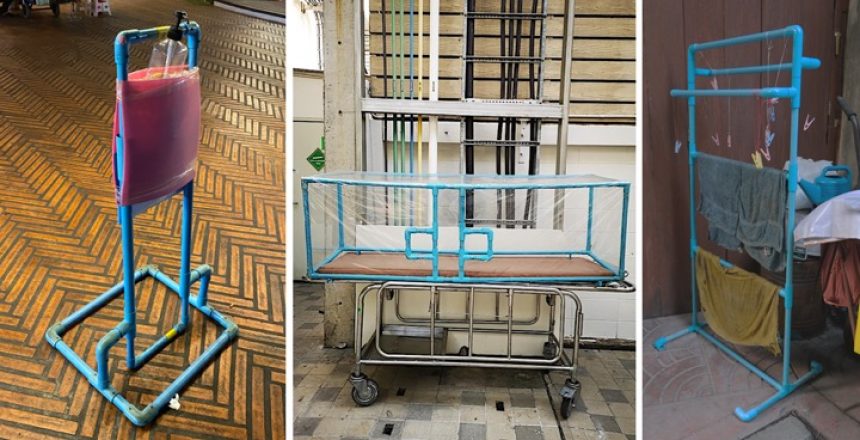 PVC pipes have long been a handy material for making impromptu street furniture. Now this Thai pop icon has been showcased at Bangkok Design Week, which runs until June 20.

Out of all the chapter topics in my book Very Thai: Everyday Popular Culture, the public favourites were the pink napkins and the blue pipes. Pink napkins might now be hard to find, but blue PVC pipes are more prominent than ever. Lately they’ve been employed in the control of Covid-19. And now they’re the subject of an installation in this year’s delayed Bangkok Design Week, ending this Sunday, by one of Thailand’s brightest young architects, Chatchavan Suwansawat.

The pipes are colour-coded bright blue because they’re for carrying fresh water, while yellow pipes carry electric wires, white pipes are a dry conduit, and so forth. They’re luridly visible partly because Thai buildings often have their plumbing – like their wiring and air-conditioning – in plain utilitarian view. That makes them easy to repair, though less easy on the eye.

What made the blue pipe a Thai pop icon is the ingenuity of ordinary people using them in ad hoc constructions. Around Thai streets, you can’t miss blue water pipes that have been repurposed into clothing racks, parking barriers, awning struts, repaired table legs, or structures on vendor carts to hold lighting, fans, or garlands.

Aesthetes are aghast and traditionalists blanch that something so humdrum might represent Thainess. But Chatchavan hails from a new generation of designers who embrace the urban street culture as a legitimate Thai vernacular style. He gained fame for his blueprint drawings of ad hoc street structures, which invariably had blue pipes as a crucial component, along with found materials like worn planks, bungee cords, old election posters, plastic raffia string, and umbrellas in buckets filled with concrete.

“At first I didn’t pay much attention to PVC pipes, which architects hide as much as possible, but when walking around I saw them used everywhere for other purposes,” he says. “Due to being an improvised detail made by ordinary people, it is, therefore, a character of Thai design.”

It’s actually an old technology made from modern material. “People use blue PVC pipes like bamboo crafts are used in the folk vernacular style,” Chatchavan says. “Therefore it is not difficult for them to imagine, and apply it, in ways that they are familiar with in the provinces. PVC pipes are therefore a substitute for bamboo that’s easily found in urban areas.”

PVC pipes aren’t as strong as bamboo, though, but their short lifespan suits their temporary use on the roadside. Cheap and accessible from any local hardware store, they have many kinds of joints that enable a variety of shapes. Think of the blue pipe as an all-purpose, long, narrow, hollow thing for fitting with other found things to make combination things. Therefore, they’ve become the first choice for ordinary people to solve problems and invent everyday contraptions, whether for construction or additions or as substitutes.

When the Covid-19 pandemic required a sudden need for structures to enable social distancing, Thais reached for the PVC pipe. It’s common to encounter blue pipes in counter-top barriers in banks, framing a capsule for the driver in mini-vans or as the structure of an alcohol gel dispenser. “We see blue pipes used to create many anti-virus toolkits, such as the frame for partitions lined with transparent plastic, whether used in the hospital or on a street dining table. They’re even used as a tube to deliver drugs to patients in the hospital to prevent the spread of infection,” Chatchavan says. “These reflect the Thai adaptive way of thinking.”

When the much-delayed Bangkok Design Week faced the problem of keeping crowds apart, the organiser, TCDC (Thailand Creative and Design Centre), commissioned Chatchavan’s company, Everyday Architect. “Asked to design an installation to create social distance, I immediately thought about how people used blue pipes to prevent Covid-19,” he says. After a lot of experimenting, I found that a feature of PVC tubing is the ability to twist and bend with heat. This allows me to design any form I want. So the gateways to Bangkok Design Week use curved pipes to keep social distance amid the queues.”

Understandably, TCDC preferred the more stylish look of white pipes, though they’re weaker. PVC pipes have different grades for each colour, according to their function. The blue one is the cheapest, yet the strongest and most durable. So the untrained non-designer public make the structurally wise choice.

“In an era that requires economy and functionality, it’s good to bring up blue pipes as a design issue if we want to be a designer society,” Chatchavan concludes. “It can do a lot.”