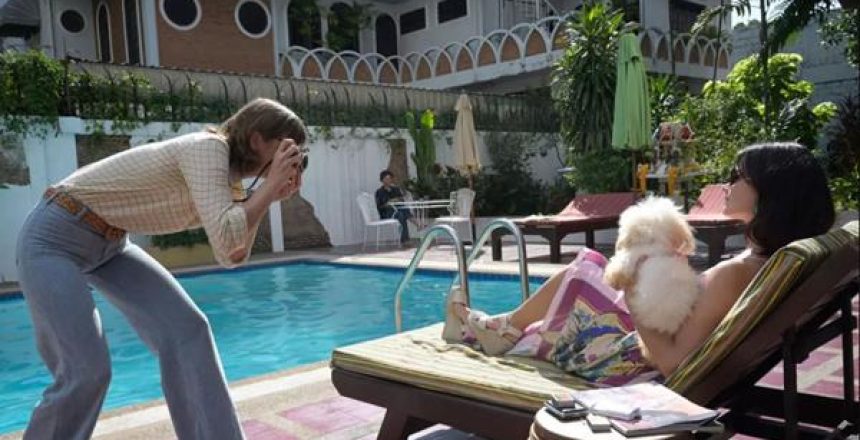 The hit Netflix series The Serpent portrayed 1970s Bangkok with rare realism, but how else has the Thai capital been depicted in film?

Many Bangkokians binge-watched the rare appearance of a TV series set in their city when Netflix recently released The Serpent, an eight-episode biopic of the 1970s serial killer Charles Sobhraj. His trail of backpacker murders began in Kanit House, a since-demolished apartment block in Soi Saladaeng, which was faithfully evoked by shooting the scenes in another low-rise “court” block at Baan Bellawin in Sukhumvit Soi 4. While the drama got mixed reviews and sparked controversy for allegedly “glamourising” the Jetset escapades of Sobhraj and his accomplices, the set design and costuming earned universal plaudits. It felt like projecting a Super-8 reel from an era that just about survives in living memory.

Mid-20th century design has come back into fashion as “retro,” and countless set details were relished for their period accuracy by those who recall that time and place. That Americanised modernist style began to fade in the 1990s and those climate-appropriate court blocks (with their deep balconies, cross-ventilation and intimate pool courtyards) have become rare. Post-war modernity was crucial to Bangkok’s development before being nearly erased by neo-traditional and post-modern pastiches. That wistful context lends the series the quality of a precious artefact, preserving in cinematic aspic a Bangkok hybrid modernism that’s gone unprotected as heritage, and under-documented in museums.

Bangkok hadn’t been much celebrated in realist terms; this chaotic megalopolis was taken as an anonymous backdrop rather than its distinct urban form driving the plot. Defining Bangkok’s sense of identity, as separate from Thainess, is still elusive. So it’s fitting that Bangkok developed a double-life acting as a stand-in film location for other places, notably as Saigon in Good Morning, Vietnam and The Deer Hunter, or as a generic Asian megacity in Tomorrow Never Dies, with its James Bond tuk-tuk chase through a Chinatown that didn’t treat Yaowarat as a distinct part of Bangkok, as say the Hollywood film Chinatown was particular to its LA setting.

Krung Thep is the location in countless Thai movies, but usually as an incidental “extra” rather than about some aspect of the city. Many directors began in advertising, and those aspirational values didn’t match Bangkok’s harsh realities, notes critic Robert Williams: “Films here need not appeal to the viewer’s sense of self, consequently the way in which Bangkok’s physical landscape may reflect something more internal.”

During the democratic interval of the mid 1990s to mid-2010s, movies set in Bangkok became more representative and faithfully researched. In Sia Dai (1996) by ML Chatrichalerm Yukol (who went on to make nationalistic “historical” epics), the daughter of a single-parent policeman sniffed glue on the roof of his apartment block, staring vacantly over the expressway.

The “New Wave” of Thai cinema is credited as beginning with Nonzee Nimibutr’s Dang Bireley and Young Gangsters (1997), set in the original pop culture scene of 1950s Wang Burapha. Its sweeter equivalent for the youth culture of 2007, Love of Siam, was as much about the milieu of Siam Square as a crucible where the youth culture struggled to emerge from mainstream conformity.

Bangkok Love Story by Poj Arnon (2007) was a breakthrough movie twice over. Besides being Thailand’s debut mainstream gay romantic thriller, its cinematography was the first to relish Bangkok’s cityness as a character, with emotive shots of architecture, whether glitzy or decrepit. The constant rattling of the SkyTrain’s track near the rooftop hideout in Stahorn felt as gnarly as films set beside London’s railway arches or Chicago’s L-train girders. The Skytrain was romanticised in an acclaimed straight counterpart movie, Bangkok Traffic (Love) Story (2009), with the title’s initials intentionally matching its setting on the BTS elevated train.

Cinematically, Bangkok has been a codeword for “sin.” Bangkok Dangerous (2000) had a deaf hitman causing mayhem, while Hollywood’s less edgy remake (2008) only reinforced the notoriety. Bangkok’s dodgy rep got sent up in Hangover II (2011), with stag night misadventures brimming with everyday street details that residents know all too well, and a denouement that turned Sirocco rooftop bar into an icon. That tower’s abandoned neighbour Sathorn Unique (aka Ghost Tower) was immortalised in one of many ghost movies shot at Bangkok haunts, The Promise (2017).

Soi Cowboy (2008) is a new breed of art film that treats sex tourism with stylised dark humour. The Thai-to-Thai flesh trade got overdue scrutiny in Prabda Yoon’s Motel Mist (2016), about bondage in a suburban love motel.

Ironically, some of the most realistic films of the city were part of Sawasdee Bangkok (Hello Bangkok, 2010), a PR compendium commissioned by the Bangkok Metropolitan Authority from Thai PBS TV, which hired nine top directors for segments about urban lives. The best four formed a movie: Wisit Sasanatieng (a blind lottery seller dossing under a bridge believes an angel acts as her eyes); Aditya Assarat (internationalised Thai guys try to fathom Thai women); Kongdej Jaturanrasamee (an artless migrant picks up a “tamarind tree ghost,” slang for a working girl of Sanam Luang); and Pen-Ek Ratanaruang (a young snob repels a hobo who only wants to fix her broken-down car).

The same four-director format was used for Ten Years Thailand (2018), with Wisit, Aditya, Apichatpong Weerasthakul and Chulayarnon Siriphol in a much bleaker critique, mainly of the capital, interpreting cultural suppression and the re-staging of a real military raid on Bangkok’s N22 gallery enclave.

Pen-Ek has often depicted the capital with unvarnished honesty, including the short Total Bangkok, about kids footballing under the expressway at night. His early nihilistic thriller 6ixtynin9 (1999) was set in a typical suburban apartment, while Ploy (2007) had a hi-so Thai marriage unravelling in a condo.

Kongdej has also shown Bangkok with refreshing candour. In P-047 (2011), a pair of alienated Bangkokians break into empty homes to sample the lifestyles of others, then leave them exactly as found. His acclaimed Tang Wong (2013) contrasted a youth having to learn traditional dance in humdrum urban settings against the context of his father’s being shot at in a political protest crackdown beneath an expressway.

A recent film that took its research as seriously as The Serpent was Only God Forgives, in which director Nicolas Winding Refn makes street Bangkok integral to this slick thriller. Perhaps the most-affecting warts-and-all depiction is Citizen Dog (2004), AKA Mah Nakhon (2004), a pun on the word for metropolis from the capital’s formal name Krungthep Mahanakhon. In this sardonic fantasy set in the informal economy, director Wisit Sasanatieng cast the leads as low-status citizens whose uniforms bear menial labels, such as maid, driver, guard or factory. The film has a fairytale quality in which the earnest decency of ordinary residents can reform a rapacious urban monster into a brighter city for all.

This column is syndicated by River Books and relates to a topic in Philip’s influential bestselling book, Very Bangkok: In the City of the Senses