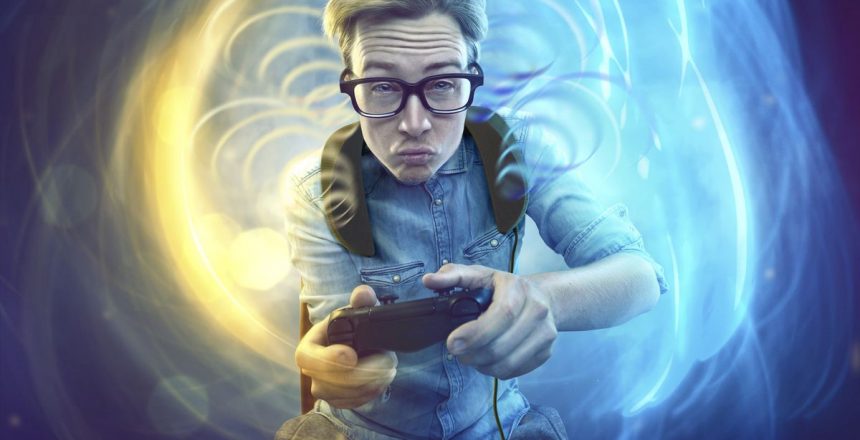 We recently wrote how Panasonic maybe went a little overboard with wacky promotional images for its new SoundSlayer wearable gaming speaker. Fun, right? Here’s something less amusing: it appears that Panasonic couldn’t be bothered to take actual photos of its product on actual human beings, so it digitally inserted them into royalty-free pictures from Shutterstock and Getty Images. And then, it appears to have done something worse: stick a white man’s head on a Black man’s body, altering his skin tone to match.

If you type “nerdy gamer” into Shutterstock, it’s the very first result.

There’s no question this image from Lasse Behnke is the one Panasonic used — but the model sure isn’t wearing a Panasonic neck speaker. (It’s also not clear why the DualShock 4’s light bar has been edited out.)

Okay, now for the ugly one. First, the image Panasonic provided alongside its new product, and below it, the original photo.

These might look like very different people, but that’s the editing at work — they clearly have the same hands, the same shirt (with the same exact creases), the same arm definition, and the same throat, in the same posture. Someone took the Black man’s body, stuck a white man’s head on top, lightened his skin, and changed the color of his game controller and his shirt.

Whose head is on whose body, though? There’s little question that it was the Black man whose identity got erased, instead of the other way around. I took a look at the EXIF data in Panasonic’s picture, and it reads: “Young African American man eating pizza, drinking beer and playing video games.” Not only is that the exact title of the Getty Image above, the EXIF also mentions Getty Images and photographer blackCAT, and so it’s extremely likely Panasonic started with the Black man’s photo.

It’s less clear whether anything would actually prohibit Panasonic from modifying the images in this way, or whether the original photographers and models have any say at all — when you buy a royalty-free image on these platforms, you buy the ability to freely use and modify it, without having to negotiate with the artist.

And while Shutterstock’s license agreement does say customers may not “Portray any person depicted in Visual Content (a “Model”) in a way that a reasonable person would find offensive,” Getty Images doesn’t seem to have any similar terms. Getty’s restrictions are primarily around “editorial” content, so that journalists’ photos of real-world news events aren’t used in advertising or endorsements.

After we brought these images to Panasonic’s attention yesterday afternoon, it pulled every promo image featuring a human being from its image distribution folder for this product. As of this morning, a representative told The Verge that it’s still looking into the matter but didn’t offer a timetable for a response.

It’s not the first time a tech company has replaced a Black man’s head with a white one in a promotional image, by the way: Microsoft was caught doing it on its Polish website in 2009.