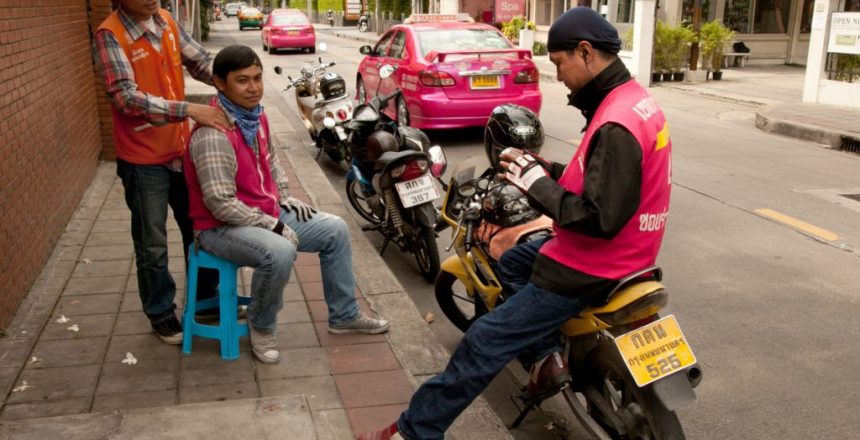 How the evolution of Thailand’s motorcycle taxi jacket is a symbol of social change and a window on the roiling subculture of the Thai ‘rider’ workforce.

The COVID-19 pandemic poses dilemmas in getting around. We’ve been travelling less overall, and more in private transport, but that’s not always possible. Faced with public transport options, millions still rely on Thailand’s motorcycle taxis. Passengers may be proximate to drivers, but as the virus is more airborne than transmitted by surface, the unenclosed rides are better ventilated than sitting confined in a taxi, bus, or a train. That also means bike passengers are open to the elements, with all the heat, sun, rain, and wind that entails.

Hopping on the pillion seat, you get a close-up view (and rarely washed aroma) of the iconic seua win – the motorcycle taxi vest. Each bears the name of the win (motorcycle taxi rank), which is typically located at a major intersection or soi mouth. The history of the seua win is a window on cultural change.

The motorcycle taxi was conceived in the mid-1980s at Soi Ngam Duphli and grew from 100 in 1986 to 37,500 in 1994 to Bangkok’s current 180,000 riders at about 3,000 win. Its popularity grew with the local mass production of Japanese motorcycles as an ad hoc solution to the new congestion of industrialising cities. This gave rise to freestyle outfits to indicate where the diver is based. They would design their own vest, embroidering fanciful lettering onto vivid cloth. The best of these are a form of folk art that have become collectibles.

Soon local businesses saw the potential to supply vests bearing the company name as forms of mobile advertising, typically in their branded colour. Some bore the name of a benefactor – a kind of face-gaining publicity. These commercial designs, too, had a character and variety that makes them a pop culture artefact.

The vests are numbered, and getting that position reputedly still carries a price for joining. Vests used to cost tens, even hundreds of thousands of baht to buy from the mafia controllers of each rank. A reform by the Thaksin Shinawatra government tried to expunge the extortionists by having drivers register with the BMA, get treated as a profession with social security benefits, and wear their ID card in a uniform orange jacket with their name and number. Grateful for this recognition, many motorsai drivers were so active in the Red Shirt protests of 2008-10 that they became a kind of reconnaissance and cavalry for the demonstrators. That role was detailed in Claudio Sopranzetti’s celebrated book Owners of the Map: Motorcycle Taxi Drivers, Mobility and Politics in Bangkok.

The vests also became unisex, because the trade is no longer a fraternity. Ever more drivers are women, offering an option for female passengers wary of riding so closely behind a male stranger. One has even been elected as the first female leader of a win. In another social phenomenon, crime is reportedly lower within 100 metres of a win due to their informal surveillance of the area and willingness to intervene to stop thefts and assaults. They are a proven social benefit.

Another change in uniform came with the coup in 2014, when the junta redid the reform on their own terms, with informants rumoured to be put on many win. A more official-style orange and black jacket, made of high-visibility nylon mesh, had the ID Velcroed to the nape so it would be visible to passengers. The authorities have had a clean-up mentality, but the win motorsai remain essential to getting around for logistical reasons, not least in connecting commuters between mass transit and home.

The digital revolution has now affected the number and the role of motorcycle taxis and their livery. Apps increasingly dominate ride-hailing, and delivery of goods, especially food, which has accelerated during the pandemic. Apps (all foreign-owned) initially aroused opposition from win, but the losers were mainly the controlling mafias, rather than the drivers, many of whom switched to riding for GrabBike or LINEman, which combine the roles of taxi, courier and delivery.

Ever more of today’s traffic is commercial motorcycle drivers, in jackets bearing the logo of the major ride-hailing apps like the green-jacketed Grab, also the colour of the Indonesian pioneer of the industry Go-Jek, which in 2021 sold its Thai business to AirAsia, a firm that is famously outfitted in red. Meanwhile, the food delivery firm FoodPanda is coloured pink, Robinhood in yellow and purple, while orange is the hue of both the goods delivery firm Lazada and courier company Kerry Express. Just as Bangkok’s taxis form a rainbow of companies and operatives of differing colours, so do the jackets of motorcycle-based businesses. Thai traffic is ever more colour-coded.

There are so many motorcycle rider recruits that their jackets have become the costume of a distinct subculture, with food deliverers getting the collective nickname “rider.” Bike workers share their own common set of experiences, beyond their uniforms and bike-centred workplace. In place of the boredom of waiting on the win for their turn to do the same old soi run, they rove around by app-dictated schedule, and get corralled together into waiting zones at offices, malls and restaurants. With only fleeting social interactions, they endure notoriously poor pay, conditions and job security. Their relentless, time-pressed journeying also spur risk-taking shortcuts, making illegal U-turns, riding on pavements, or weaving through traffic. Car drivers often berate motorcyclists as malaeng wan – flies.

Riders’ branded jackets instantly conjure strong imagery in the public mind. To some they are the garb of a servant class, to many an integral character of street life, to others a beacon of liberty from confined workplaces. Motorcyclists have a rebellious, freewheeling allure akin to horsemen, even cowboys. Social media reveals that a few treat gallivanting riders as figures of fantasy, their uniform as a fetish object. Given the dangers of the road, the jackets are often paired with protective tattoos, or their fabric inscribed with a magical diagram like a pha yantra (amulet cloth) in jacket form.

Clad in identifiable uniforms, riders can’t escape being brand ambassadors. That predicament prompted viral memes when a rider in FoodPanda livery was arrested for lese mejeste after a demonstration. His instant sacking by FoodPanda sparked a boycott of the food delivery firm, and a semi-retraction. The partisan incident reinforced the role of uniforms as a contested territory of Thailand’s social division.

The riders enjoy their freedom, yet their lack of employment rights came into relief just as the Thai ride-hailing sector had leapt in value to US$1.1 billion by 2020. LINEman claimed that they had been paying more than other hailing/delivery apps, but instead of leading the way to professional rates, in April 2021 they reduced wages. This was at the height of when riders were taking on increased exposure to COVID-19 so that customers could shield themselves. While the style of jacket keeps changing with the political and economic climate, the vulnerability of riders in the gig economy remains consistent.

Among the topics in my book Very Thai, some have become rare, but the bike jacket has diversified and grown to join the tuk-tuk as a secular icon of Bangkok. At the launch party for Very Thai, we featured many of the book’s topics as party themes, from drinks-in-bags to blind bands. As host, I wore a seua win borrowed from a driver on my soi’s win. In the exhibition I co-curated at TCDC, Invisible Things,” among the humdrum artefacts of everyday living in Thailand, we included a seua win. Artists from Pariwat Anantachina to Dani Monfort Gil have included seua win to indicate a sense of place in their artwork. Thai souvenir graphics and figurines also often include people wearing the seua win. All this is proof that the motorcycle taxi vest is both a museum-status artefact – and an ever-evolving icon of Thai culture.

(Right) The first standardised jackets had a variety of colours. A yellow jacket in Phra Phradaeng.