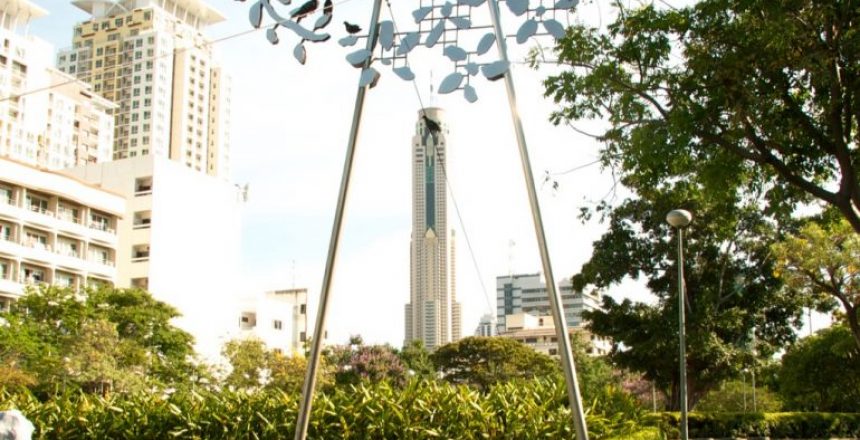 When lockdowns quieten the city, we start sensing urban life in fuller ways. Among Bangkok’s most diverse residents are its birds. It turns out that Bangkok is a birder’s paradise. Here is a guide to city birdsong.

Lockdowns have taught a lot of life lessons, especially about health, socialising and the shift from offices and malls to home working and digital delivery. COVID’s great quelling of activity also awakens our senses to ignored aspects of urban life. Bluer skies make clear the extent of the usual air pollution. Empty roads remind us how planners favour the car over the free movement of people, pets, and wildlife. And birds alert us – like the proverbial canary in a coal mine – to the threat to biodiversity as greenery succumbs to concrete.

Isolating at home reminds me of the annual sacred day called Nyepi, on the Indonesian island of Bali. To fool spirits into believing there are no humans to haunt, for 24 hours nobody is allowed out of their home. Traffic vanishes, industry halts, and even flights are grounded. You’re not supposed to use motors, play music, use electronics or turn on artificial lights. Through the surreal day, gradually more and more birds flock to human areas they’d normally be driven away from by noise, fumes, or disturbance. Come dusk, the deafening birdsong brings home how strongly nature had impacted human life for eons before modernity drove much of it towards extinction.

Lockdown in Bangkok is like a mini-Nyepi. The dawn chorus erupts with chirps, fluttering whirrs, and abrupt random honks. After a gap of years, hummingbird-like Suncatchers hover around the “Birds of Paradise” blooms. I’ve noticed pied fantails return to do mating dances around my fish pots and then nest in my Dok Kaew trees. The loudest bird in Thailand, a relative of the cuckoo called the Asian Koel, shatters the air with piercing whoops that can be heard from a kilometre away. For anyone who’s heard it, the Koel’s mating call is a telltale sound of Thailand.

Few know that this city is one of the world’s major birding sites. On a single week’s visit here, birder Hanno Stamm identified 85 species, including Dollarbirds, Yellow Vented Bulbuls, and the Greater Racket-tailed Drongo.

Bangkok may seem to be an unlikely nest, but it was built atop a vast, nourishing wetland. The immediate surrounds of the upper Thai Gulf are one of the world’s most unsung, yet vital, birding zones. Here in 2007, ornithologists found a Large-billed Reed Warbler, a species whose warble had gone unheard in 129 years.

Every cool season, millions of migratory birds fly from northern climes to feeding and mating grounds in Bangkok. Oddly, Siberian swifts only gather in two locations, Wireless Road and Patpong, where patrons dodge droppings as they bar-hop. Experts assume insects may have originally drawn this annual frenzy from October to March. Even Skytrain noise and the cutting their favoured trees hasn’t diverted the birds from their perches on Silom window ledges, though numbers do seem to have declined, as birdlife has worldwide.

Recent years have witnessed an accelerated decline in urban nature generally. When a horizontal city, Bangkok was laced with trees, gardens, plantations, and undeveloped plots. That greenery provided nesting places and plentiful insect food. The race to build towers hits birds in two ways: removing greenery and filling the sky with glazed walls that draw birds to collide with the glass, becoming the second-biggest killer of birds behind cats. In times past a common cull was by slingshots. Another reason that many species are threatened is chemical: pesticides, water pollution and the fogging of mosquitoes have stolen birds’ insect food from their beaks.

Yet some birds thrive in this modern environment. And not just the pigeons in one of the city’s few plazas around the Giant Swing. Facing the wooded peninsula of Bang Kra Jao, Bangchak Oil Company runs the Bangchak Bird-watching Club, where enthusiasts can view the habitat around the oil refinery.

One drawback to siting Suvarnabhumi Airport at low-lying Cobra Swamp (Nong Ngu Hao) was the risk of jets sucking up the local wildfowl. Its Bird Control Unit tries to keep the airport’s water devoid of lifeforms, to deter herons and cranes, as well as reducing nearby flocks. Nevertheless, not far away, near Lad Krabang Industrial Estate, you can spot owls, egrets and mynahs at Putkao Bird Sanctuary. Cormorants arrive in the rainy season, while most Open-billed Storks fly north in summer. Storks also nest upriver in Pathum Thani at Wat Pailom and at a stork colony in the rice fields at Lumlukka, visited on cycle tours like Spice Roads. Other ornithologists go birding at Bang Phra Non-hunting Area.

Historically, Thailand was full of wildlife, with lower Isaan once second only to the African savannah in large mammals. With the big game virtually exterminated in the Thai wild, binoculars focus on birds, with birders joining organised trips such as those by Nature Trails.

Bangkokians also enjoy birdsong by caging the singers. Fanciers and breeders peruse bird markets like Chatuchak. Older neighbourhoods – especially of Malay Muslims – fringe their verandahs and awnings with graceful rattan cages, shaded by coloured cloth shades and slung from an ornamental hook. Hopping inside, Mynahs, Barred Doves, and Red-Vented Bulbuls bring music to the ears of residents and judges in cooing contests.

While air pollution will doubtless return, and insects continue to decline, the loss of green gaps may intensify with a mooted tax on unused land. The redevelopment of Makkasan swamp threatens to ruin not just the city’s largest greensward, but also its last downtown wetland. The adjacent district of Din Daeng, one of the most polluted areas, was where a firm made the CD “Bangkok Birds: Field Recordings.” Bangkok’s dawn chorus might end up being just digital.