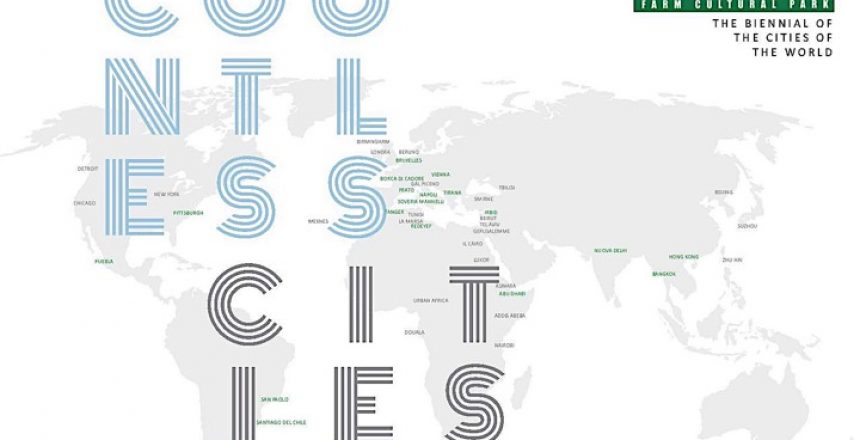 Author Philip Cornwel-Smith tells how his book Very Bangkok became the theme of the Bangkok Pavilion at ‘Countless Cities,’ the ‘Biennale of the Cities of the World’ being held in Sicily, Italy.

Cities, like countries, present two faces: formal and informal. Bangkok expresses an extreme split-personality, between its chaotic, casual charm, and its ritual role as the pedestal of approved Thainess. Preoccupation with promoting the nation’s face of “tradition” displaces the city’s own urban identity, relegating Bangkok’s ambiguous, discomfiting realities to be told through the unofficial fringe.

When Bangkok joined the art biennial trend, the art scene felt this two-way tug. Bangkok Art Biennale staged famous names in spectacular venues through support from the government, corporations, and institutions. Meanwhile, an independent Bangkok Biennial had been set up anonymously through organic wiki links to stage challenging art at impromptu sites.

Indie biennales have occurred elsewhere, too, and not all biennales focus on art. This year, Italy hosts two biennales about things urban: one state-sponsored formal showcase, one informal indie project. Each has a contrasting Thai pavilion, though they both question established thinking and suggest that architects can learn from non-architects.

The COVID-delayed Venice Architecture Biennale has an official Thailand Pavilion about how Kuy tribal mahouts share their homes with elephants. Coexistence with nature responds to the Biennale theme: “How will we live together?” Yet this anthropological curiosity is a near-extinct rural tradition remote from modern Thai life. Bangkokians wrangle over where to park their vendor cart, not their pet elephant.

By contrast, the Biennale of the Cities of the World in Favara, Sicily, focuses on practical urban issues under the theme: “People Live Here: A More Human Approach.” Also known as Countless Cities, it is a bohemian biennale in an independent arts complex, FARM Cultural Park, which famously reversed Favara’s decline. Running until mid-January 2022, its second edition has 22 pavilions covering cities on five continents, from Tirana to Tangier, Pueblo to Pittsburgh, New Delhi to Abu Dhabi. The curators based the Bangkok Pavilion on my book, Very Bangkok: In the City of the Senses.

The sub-themes of the biennale are Housing Diversity, Good Business, and Parkifying the Future. Very Bangkok’s content relates to all three topics, but the best fit is “Good Business,” by which they mean the “rediscovery of some manual professions, that fuel passion, territoriality, and durability, with attention to social entrepreneurship and innovative solutions to social, environmental, economic and cultural challenges.” That sums up the situation of Thai market vendors. So the Bangkok Pavilion centres on an installation of a street-food cart.

“I spent a few weeks in Thailand and stayed in Bangkok,” says Andrea Bartoli, the curator who co-founded FARM. “What is really strong there is the relationship with food. You can see stall food everywhere and people eat all the day.” The cart is decked in trade talismans and the waggish stickers that Thais plaster on vehicles. At the opening this summer, food was served from the pavilion stall to give a sense of its sociable interactivity.

The second component is the photographs from the book that relate to the predicament of the informal sector in a city that’s undergoing corporate standardisation. “We first thought of putting the photographs in lightboxes along the walls, which are lined with rough, black volcanic rock,” says co-curator Alice Acquaviva. “But we like the idea to put them like menu pictures on the cart. It’s not so easy to see them, but everywhere in Palazzo Micciche you need to explore and discover the meaning of each pavilion.” Some photographs are also available on postcards for visitors to take away, in a nod to the interactivity of markets.

The third thread is online, whereby visitors (and those who can’t go) can link via a QR code on the introductory panel to stories, behind the photographs in a gallery on the book’s website, https://verybangkok.co/biennale. It’s all in both English and Italian, reflecting FARM’s even split between Sicilian, mainland Italian, and international visitors.

While some pavilions give explanatory detail, many have an indirect, experiential aesthetic, from the cavern of textiles in the Hong Kong Pavilion to an indoor “Human Forest” that “inspires people to do their best to change cities with plants and trees,” Bartoli says. “All the things we do in Favara are somehow connected with our mission to try to improve our condition, our cities, and try to empower people.”

The Bangkok Pavilion is in the rambling Palazzo Micciche, which has been added to over three centuries. Located on the “Dark Mezzanine,” it is one of several rooms with a hole in the wall so you can peer into adjacent galleries that are reachable only via a maze of staircases. “People spend hours hanging out in Palazzo Micciche, as we put plenty of places to sit,” Acquaviva says. “There are two benches in the Bangkok Pavilion and one whole wall is open air.” People can gaze from there across the rooftops to Favara’s cathedral dome.

Countless Cities has four sites in Favara, including the Palazzo Cafisi, but the core is FARM’s permanent Sette Cortili complex in the old town. “It’s a diffused space, not an architectural statement like the Giardinale or Arsenale in Venice,” Bartoli says. “It’s inspired by a Moroccan casbah, with small courtyards and hidden gardens between several project rooms, plus one big exhibition space.”

Unlike at Venice, there isn’t a large curated exhibition, although at the previous biennale in Favara the “starchitect” Sir David Adjaye curated a show about 53 African cities. “The first Countless Cities in 2019 basally celebrated Africa’s arrival mostly due to Mr Salvini closing our ports to migrants,” says Bartoli, a critic of Italy’s then-rightist government. “So it was a political choice to open FARM Cultural Park to African issues – and to show that Africa is more than just problems with refugees.”

As one of the first biennales to happen during the pandemic, Countless Cities had to be prepared despite most of its exhibitors and curators being locked down in separate locations, even within Italy. Andrea and Alice curated the Bangkok Pavilion as I was stuck in Thailand. The logistics were daunting, and the opening was delayed by several months, but they took heart from Bangkok Art Biennale 2020, which is famed internationally for how it continued unbowed by Covid.

Most of this year’s pavilions tackle social topics, often showcasing civic initiatives, like the Tic-Tac Art Centre in Brussels, the New Delhi street artist collective ST+ART, or the work by Lab.Pro.Fab at the Tiuna el Fuerte Cultural Park in Caracas, Venezuela. The Caracas Pavilion is one of two off-site pavilions of the Venice Architecture Biennale, showing how these events are not rivals but cousins: one a polished academic, one a streetwise bohemian.

The biggest draw is the setting itself. Bartoli, a notary based in Paris, felt inspired to revive his Sicilian hometown, which was losing its industry and youth. In 2010, he and his lawyer wife Florinda Saleva bought up abandoned parts of Favara’s old town, which friends helped turn into cultural spaces. With the keen interest of architects, artists, politicians and economists, this private cultural institution became a world-famous example of urban regeneration that has drawn millions of visitors to a town that previously had no hospitality industry.

“In the past, Favara was a city of mafia, of neglect, vacant. Now Favara is a city of young people, of art, of experimentation. We are a small capital of urban regeneration,” Bartoli says. FARM has since gained recognition from UNESCO, UN Habitat, US organisations and the EU’s New European Bauhaus project. An early champion was Charles Landry, founder of the Creative Cities Movement and the Creative Bureaucracy Festival, who has made displays at both editions of Countless Cities.

“The most important thing about FARM Cultural Park is not the biennial, it’s not our Schools of Architecture for Children, it’s not our School of Politics for Young Women, which now has 10 schools around Italy,” Bartoli declares. “Most important is what happens in the city. Every day, we receive visitors, journalists, tourists, people doing residencies, running workshops, starting new projects. The people of Favara came to understand that this was an opportunity to develop businesses, open hotels, make restaurants, etc., so many young people decided not to move, but to stay.”

Now FARM is a model for others. “Favara was totally unknown, and now it is quite famous in cultural and urbanism fields,” he adds. “So we started inviting people from all around the world, sharing all our tools, energy, patience and networks. We spread trust and enthusiasm. Then people from Favara started to do their best for their city to have a position in the world.”

UNESCO invited Bartoli to China because it’s facing the same problem of how to manage declining rural villages. “I discovered during that year that the answer is citizens,” he says. “You need to enable citizens to be cultural leaders and civic leaders.” It’s this kind of energy, ideas and initiative that young independent urbanists are starting to spark in Thailand. The Bangkok Pavilion includes the social enterprise work of landscape architects Shma. Projects include last month’s “New Green Possibilities” forums and the current competition, “Uniquely Thai: Envisioning the 21st Century Bangkok Civic Center,” which is all about culture, creativity and sustainable urban development. Like Favara, Bangkok’s informal civic society can spread trust and enthusiasm, do their best and have a position in the world.

This article relates to a chapter in Philip Cornwel-Smith’s latest book, Very Bangkok: In the City of the Senses. It is the long-awaited follow-up to Philip’s influential bestseller, Very  Thai: Everyday Popular Culture. Both books are available from leading retailers and direct via the publisher at River Books.