KEEP THE FAITH: Yaowarat During the 2021 Vegetarian Festival 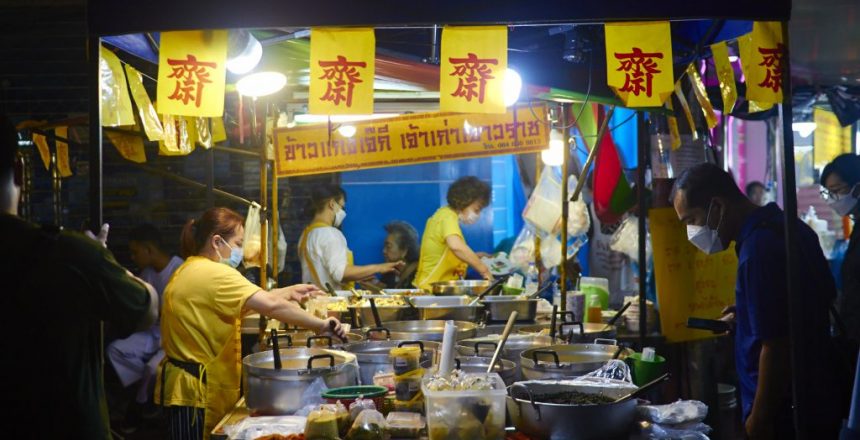 This year’s “Jeh” Vegetarian Festival, held from Oct. 6-14, is being strictly curtailed. Even the neon signs on Yaowarat Road are mostly off, another sign of the economic pain that Chinatown has suffered during COVID-19.

The main road was open for regular traffic. It’s normally closed during the nine-day celebration, the annual feast of vegan food stalls with iconic yellow flags flying overhead. There were no flags this year and the lion parades were also gone. Food carts were scarce, with only a few people waiting in line. The busiest “Plaeng Nam” street food alley was completely quiet.

The two main seafood vendors in front of “Texas Alley,” which are normally packed, were closed due to the “non-animal-eating” practice of the fest. The temples and monasteries maintained their ritual ceremonies, no matter how few worshipers attended. “Wat Mangkon Kamalawat,” also known as the “Dragon Temple,” which is the grandest in the area, took the opportunity to fully renovate its wide-open courtyard in front.

Walking through zig-zags, in a tin sheet tunnel under the construction site, I finally reached the temple’s main hall. Worshippers dressed in white attire were praying under the yellow lantern ceiling and offering golden paper kits to gods and goddesses. The crowd was much smaller than during non-COVID times when it is almost impossible to move around and the incense smoke is overwhelming.

Even the most popular golden statues of the “God of Luck” and “God of Medicine,” with a chest-length beard and pink headscarf, were unprecedentedly quiet.

At the “Guanyin” Goddess of Mercy Shrine next to the “Odean” roundabout, worshippers were also scarce. Only a few people took turns to light incense from giant candles in front of the famous golden-sandalwood statue from the Tang Dynasty era. Right behind the shrine, where Guanyin Goddess stands, people were waiting under a makeshift tent to receive COVID vaccinations. The “Thian Fah” Foundation runs the shrine as well as the non-profit hospital that’s been a vaccination site for months.

Wishing for good health from the goddess seems most practical for those who get the vaccine injection.

“Zhou Song Gong” Shrine at the end of Talad Noi’s narrow labyrinth alley was vibrant, starting from the entrance, where there was a live cooking demonstration of the ancient “Toob Tub” dessert (sweet sticky bar made of peanuts and sugarcane). Throngs stopped to take photographs of the fire from the pans stewing sugar, amid the sound of the double-hammering action: “Toob-Tub.”

Stepping inside the 200-year-old shrine, men in white scraped off the wax from the ocean of giant candles, while others used long bamboo sticks to hang “Lucky Lanterns” onto the ceiling’s rails high above. Chinese opera performers on the main stage were doing a full-on dramatic act in front of the gods and shrine-goers.

Backstage was off-limits for the nosy photographer, as usual. I went around to see if I could get a picture of the performers wearing surgical masks, just for the record. They were chatting and smoking unmasked. I raised the camera and everyone immediately put their mask on. I snapped two frames and left.

The main road was even quieter as the 10 pm curfew approached. The hip hotel where jazz bands used to blow their saxophones every night from the open-air lobby bar appeared permanently closed, sealed with plywood. Tourists from all over the globe are long gone and there is no indication when they are coming back when all the hardships and sufferings of the pandemic will at last subside.

The colourful neon is off and the street is empty.

Deeper in the alley, though, dim and flickering, candle lights still shine quietly in the darkness.