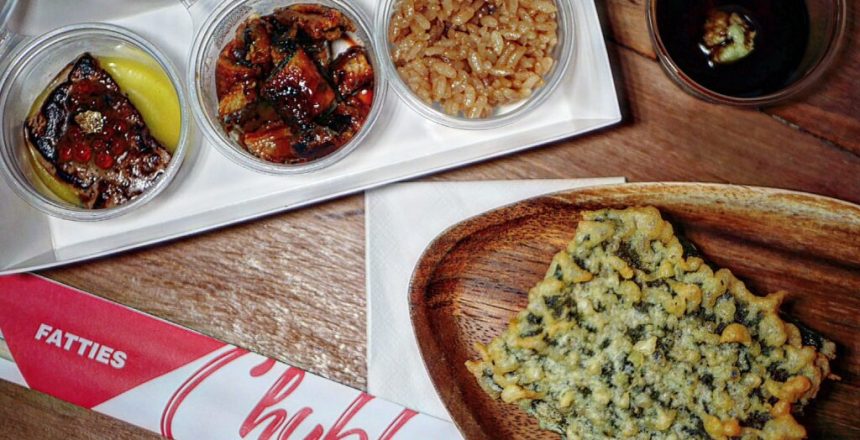 Originally created by pop-up restaurant, Norigami in Southern California circa 2017, the sushi taco had it’s brief gastronomical fame throughout American and all the way to Vancouver Canada where a pair of entrepreneurs even dedicated their entire restaurant to the concept.

The pop-up and sushi taco restaurant did close a year later but the crispy shelled nori filled with fat fish bites have found its way on a Bangkok menu somewhat 4 years later at new Donburi restaurant ‘ Fatties Bkk ‘.

Fatties Bkk, not to be confused with a local dive bar institution Fatty’s Bar & Diner or Bkk Fatty, a popular Bangkok blogger, opened in April 2021 at Centralplaza Grand Rama 9 on the B.Floor with a concept to serve Donburi (Japanese rice bowls).

Their claim to Donburi success was the rice. Niigata rice, according to Fatties Bkk is “the most well-known and best loved rice in Japan…. Soft, Fluffy, Sweet and Chewy”. Well, Bangkok Foodies couldn’t verify if the Donburi were as good as they looked because we didn’t try but we were impressed, like..really impressed by the Sushi Tacos.

Trends tend to fall flat on their face when comparing a trend with the real-life taste but the Sushi Tacos were extremely fresh, generous and ‘hella’ tasty.  We tried the trio available in their selection; Salmon Shoyu Sushi Taco | 150 THB, Una Foie Gras Sushi Taco | 180 THB, Hamachi Hotate Sushi Taco | 240 THB and couldn’t really fault either of them.

The “tacos” shells come post deep fried and although slightly hard to the touch they simply melt-away in the mouth, along with the delicious chunks of salmon and hamachi hotate. The Sushi Taco Una Foie Gras was the likely star. That touch of poultry livery fattiness gives it that extra, decadent oomph!

The fish, sauce, rice, nori taco shell components are all fairly easy to assemble and easier to eat as the nori doesn’t crack in the way traditional taco shells do but the amount of single use packaging may give you waves of guilt! Like many restaurateurs starting out, we hope they’ve found alternative eco-friendlier packaging solutions and maybe even a better reason to go to  Centralplaza Grand Rama 9 to check them out for yourselves.

Fattie’s Bkk
At Centralplaza Grand Rama 9 at B Floor