Brave browser replaces Google with its own search engine 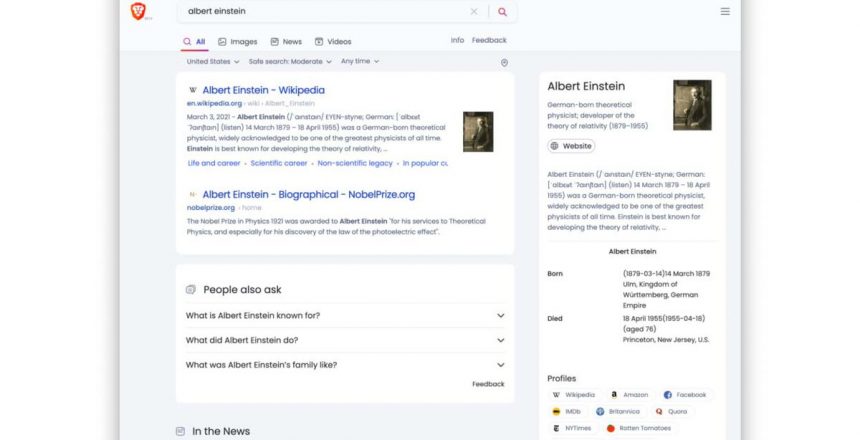 Brave, the privacy-focused browser that blocks third-party ads and trackers by default, is switching to using its own search engine by default, the company has announced. The change will be applied for new users, and will affect which search engine is used via the browser’s address bar. Brave Search will replace Google in the United States, United Kingdom, and Canada, Qwant in France, and DuckDuckGo in Germany. More countries will be switched over in the coming months.

It’s a significant step for Brave’s fledgling search engine, which launched in public beta earlier this year, since most people just take what they’re given. The search engine set as the browser default is a valuable promotion tactic, and so important that the practice has become a significant focus of antitrust scrutiny. In Europe, Google now offers a choice of search engines for Android users after it was fined $5 billion by EU regulators for, among other things, illegally tying Google search to Android. Over the years, Google has also paid companies like Apple and Firefox to be the default search engine in their browsers.

“As we know from experience in many browsers, the default setting is crucial for adoption”

“As we know from experience in many browsers, the default setting is crucial for adoption, and Brave Search has reached the quality and critical mass needed to become our default search option, and to offer our users a seamless privacy-by-default online experience,” Brave’s co-founder and CEO Brendan Eich said in a statement. He added that its search engine now handles “nearly 80 million queries per month.”

Although the switch will boost Brave Search’s prominence with Brave users, the browser’s marketshare is so small that it doesn’t even register against established competitors like Chrome, Safari, Edge, and Opera, according to data from StatCounter. Nevertheless, as of September 2021, Brave claims that its browser had almost 40 million monthly active users.

As well as boosting the prominence of Brave’s search engine, the move is a sign of its confidence in the new privacy-focused service. Brave Search is notable for being built on Brave’s own independent index of the web, whereas many competitors rely on a mix of results from larger indexes like Microsoft’s Bing (although Brave has said it will pull in results from other providers where it can’t produce enough of its own). The company says its search engine does not track “users, their searches, or their clicks.”

Alongside the change in default search engine, Brave is also launching a new opt-in system for users to contribute their data and help improve its search results. Brave claims its Web Discovery Project collects search and browsing data in a way that can’t be linked to individual users, and that cannot be sold to advertisers or handed over to the authorities.

Brave Search is currently free to use and does not show any ads, but the company says that it plans to roll out ads in its free version in the future, as well as launch an ad-free premium service.