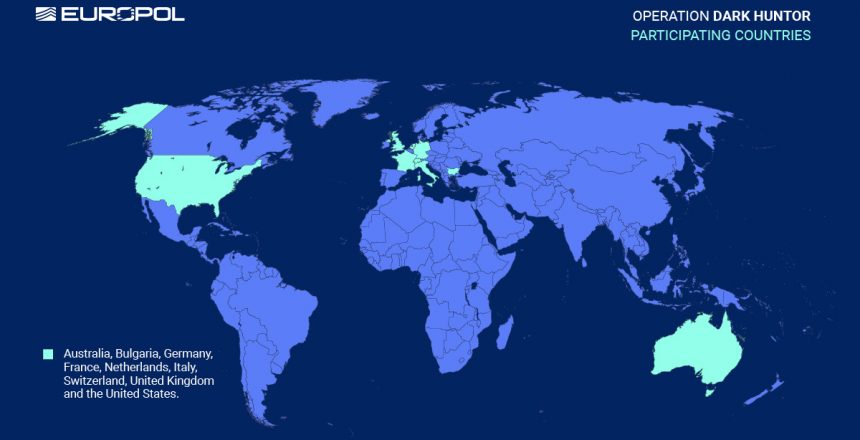 A 10-month investigation following the closure of the dark web’s largest illegal marketplace, DarkMarket, has resulted in the arrest of 150 suspected drug vendors and buyers.

DarkMarket was taken offline earlier this year as part of an international operation. The site boasted some 500,000 users and facilitated around 320,000 transactions, reports the EU’s law enforcement agency, Europol, with clientele buying and selling everything from malware and stolen credit card information, to weapons and drugs. When German authorities arrested the site’s alleged operator in January this year, they also seized valuable evidence of transactions which led to this week’s arrest of key players.

According to the US Department of Justice and Europol, Operation Dark HunTor saw law enforcement make numerous arrests in the United States (65), Germany (47), the United Kingdom (24), Italy (4), the Netherlands (4), France, (3), Switzerland (2), and Bulgaria (1). More than $31.6 million in cash and cryptocurrencies were seized during the arrests, as well 45 firearms and roughly 234 kilograms of drugs including cocaine, opioids, amphetamine, MDMA, and fentanyl. According to the DoJ: “A number of investigations are still ongoing.”

Although the dark web was once considered to be a relatively safe haven for those selling and buying drugs, international operations like Dark HunTor have seen regular arrests of suspects and speedy closure of marketplaces. The list of dark web markets closed just in recent years is extensive, including Dream, WallStreet, White House, DeepSea, and Dark Market. Although law enforcement certainly have to play Whac-A-Mole with such sites, with new markets springing up as soon as established ones are closed, doing so makes it harder for buyers and sellers to build steady businesses.

“The point of operations such as the one today is to put criminals operating on the dark web on notice: the law enforcement community has the means and global partnerships to unmask them and hold them accountable for their illegal activities, even in areas of the dark web,” said Europol’s Deputy Executive Director of Operations, Jean-Philippe Lecouffe, in a press statement.