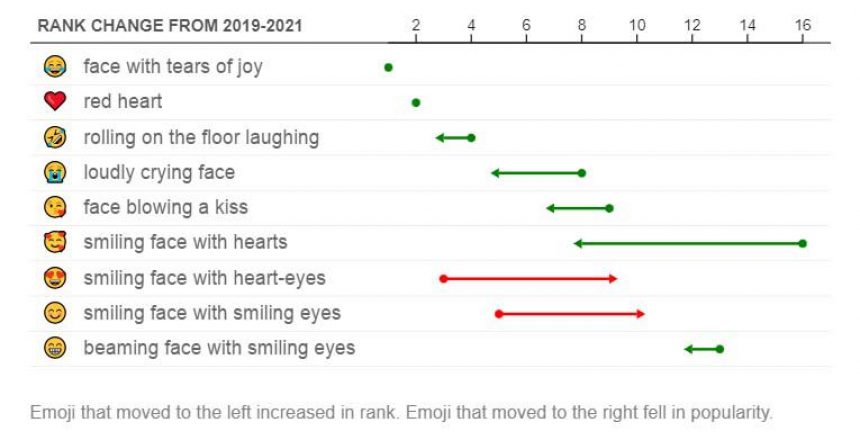 Until recently, I was a firm believer in the traditional smiley emoji. “It’s cute!” I used to think, as I happily used it to indicate my gentle amusement at everything from puns to fun weekend plans. But apparently, this was a mistake, and when I thought I was expressing sincere happiness, I was actually sending an emoji that’s “colossally insulting in every conceivable way,” according to The Guardian.

It seems the rest of the world agrees, and the “slightly smiling face,” to use its full name, doesn’t feature in the top 10 of the most used emoji in 2021. In fact, according to data from the Unicode Consortium, the slightly smiling face isn’t even in the top 20. It’s down at number 28, sandwiched between “clapping hands” and “flushed face.”

Instead of embracing the subtle joys of the slightly smiling face, the world has continued its love affair with “face with tears of joy,” a crass, blunt instrument of an emoji that leaves no room for subtlety or ambiguity. It’s reportedly been on top since at least 2017, and in 2021, it accounted for over 5 percent of emoji sent online. Ridiculous.

Jokes aside, it’s interesting to see from this data how broadly consistent the emoji we use has been, even as the world has been turned upside down by the pandemic. In its blog, the Unicode Consortium points out that the top 10 emoji has only seen one change between the two years, and even then, it was to swap two very similar emoji (“two hearts” with “smiling face with 3 hearts”).

That’s not to say there weren’t any big movers. The birthday cake emoji shot up from 113 to 25, while the balloon gently floated from 139 to 48. My personal favorite, the pleading face, also broke the top 20, rising from 97 to 14. But surprisingly, actual pandemic-related emoji haven’t seen much of a change, like the microbe emoji, which barely made it into the top 500 (there are 3,663 emoji overall, in case you’re wondering).

Beyond this sort of data being just plain interesting, it’s useful for the Unicode Consortium to understand which emoji are most popular as it decides which characters to add next. The way emoji are created is a surprisingly interesting process, and you can read about it in this article from my colleague Jay Peters (who submitted proposals for the yawning face and waffle emoji).

Still, at least there’s hope for us slightly smiling face fans out there. The emoji saw a pretty dramatic increase in popularity between 2019 and 2021, where it previously sat down at the 50th mark. At this rate, we might yet make it into the top 10 [fingers crossed emoji].