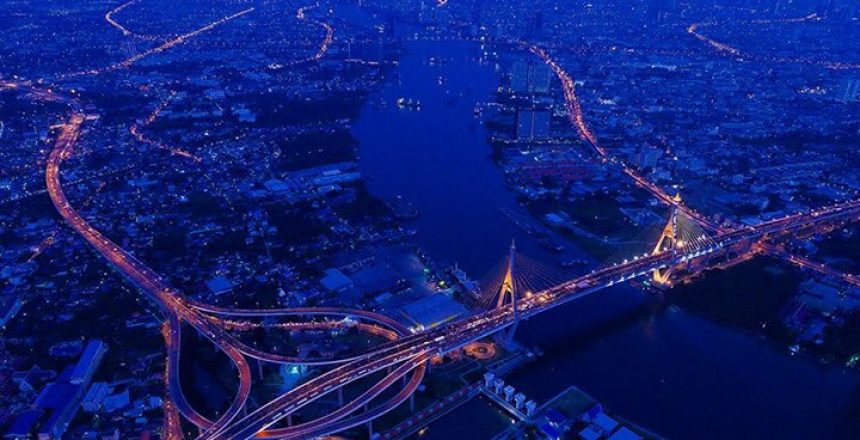 A brief history of aerial photography alongside a selection of spectacular bird’s-eye view images of Bangkok.

All innovations require a pioneer.

Gaspar Fe’lix Tornachon, better known as “Nadar,” was in 1958 the first person to take photographs from the sky. He was outside of Paris on a hot air balloon, the oldest flying object capable of carrying passengers.

Too bad the photographs were lost.

Two years later, in 1860, James Wallace Black and Samuel Archer King took what became the earliest surviving aerial photographs under the title “Boston, as the Eagle and the Wild Goose See It.”

Then in 1882, the first “kite aerial photograph” was taken by a British meteorologist, Mr. E.D. Archicald, with an explosive charge on a timer as the shutter trigger.

In 1903, German engineer Alfred Maul fired a gunpowder rocket that reached 2,600 feet in eight seconds, carrying a parachute-equipped camera that took photographs while on the way back down to the ground.

Another German apothecary, Julius Neubronner, also in 1903, accidentally invented the “pigeons photography” when he decided to strap cameras to his prescription-delivering birds to track their routes. Thanks to George Eastman for his historical invention of Kodak’s small box camera and the celluloid roll film, which set 30 second intervals while the birds took flight.

The first aerial photograph from an airplane was taken by a cinematographer, L.P. Bonvillain, over Le Mans, France in 1908, five years after the Wright Brothers’ first flight at Kitty Hawk. Wilbur Wright was the pilot flying for Bonvillain’s first shot.

Starting out purely as experimental, aerial photography became a crucial tool in WWI, which rapidly accelerated technologies on both sides. The term “Reconnaissance Aircraft” was officially established. There were more than 500,000 aerial photographs of both front lines taken altogether by the time the war was over.

After the war, commercial aerial photography was flourishing all over the globe, for mapping and surveying.

The boom didn’t last long before the world was back at war, in WWII. Aerial photography was even more important, with much-advanced technology. Reconnaissance aircraft were faster, flew higher, and were more stealth. The cameras were sharper and the film sensitivity much higher.

The chief of the German General Staff, General Werner von Fritsch, made a remarkable statement: “The nation with the best photo-reconnaissance will win the war.”

The space race during the Cold War took aerial photography even higher into outer space. Today the top view of anywhere on the planet could be seen with only a few taps on the screen.

– Drone registration with the National Radio and Broadcast Committee and a pilot’s driver’s license with the Civil Aviation Department are required.

– State and Government property and hospitals are in a “no-fly zone.”

– Fly only after sunrise and before sunset.

– No flying above community, city, or where there are mass gatherings.

– No violation of a person’s rights.

– No flying within 19 km. radius from the Victory Monument (located at the centre of the city) which means pretty much anywhere in Bangkok, except for permission from those organisations.

I first met “P’ Nui” back in 2000 when I just started my photography career based in Bangkok.

People in the industry were still reluctant about leaving film photography to digital due to the not-so-advanced technology and very costly equipment then.

P’ Nui already owned a digital back with a computer kit. He went around serving many photographers with his digital setup. Everyone calls him by the nickname “P’ Nui Digital.”

“Are you guys aiming for the National Artist title?” His sarcastic statement stirred me and many others to switch from film to digital after him. The title is given annually to the Thai artist whose work likely preserves conservative traditions.

Back in the 1990s he had his hands on an early digital commercial camera, which required three exposures of red, green, and blue to create a single image.

And when it comes to drone photography, P’ Nui is surely one of the very first to leap for it.

He has long been a radio control, or RC, model airplane flyer. His early attempts over 10 years ago were mounting his SLR camera onto his RC plane. Of course, he failed many times and broke a bunch of cameras.

When the drone with a built-in camera launched, he jumped right on it. I remember he said to me then, “This is too crowded down here. I’m leaving you guys for the sky now.”

He works for commercial and various organizations, namely the Travel Authority of Thailand and a few news channels’ sky reports.

Five years ago he barely escaped a fatal helicopter accident only because his news superior called him to cancel their regular routine flight to an Isaan province. The superior went and died together with the pilots.

He survived and became one of the busiest drone flyers today. Guess what everyone calls him now?