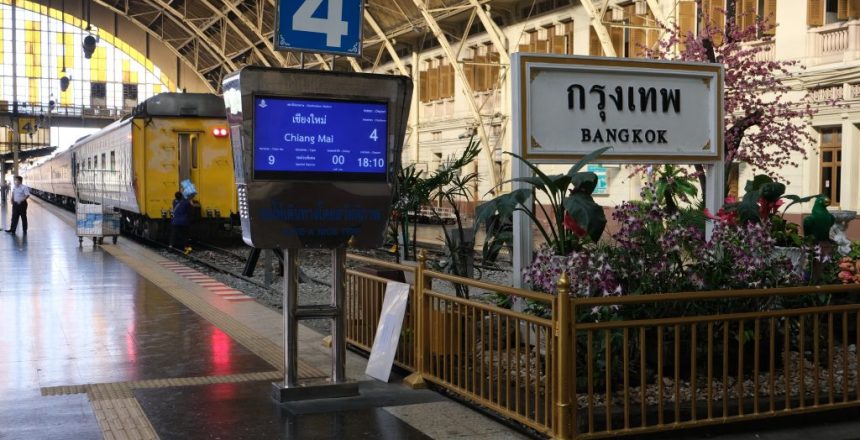 What counts as heritage in contemporary Bangkok? How do the demolition of Scala Cinema and closure of Hua Lamphong Station show who gets to decide what landmarks get saved—and why?

This December I took a sleeper train to Chiang Mai from Hua Lamphong Station ahead of its much-publicised closure as Bangkok’s downtown rail hub. The concourse and platforms swarmed with as many sightseers as passengers, and most of both groups took photographs of the terminal’s last days as the centre of Thai train culture. Sleeper trains will of course continue from the new terminus of Bang Sue Grand Station, and some local services continue for a while, but that shift will sever a historical link with a relegated past and a migratory demographic that evidently aren’t the priority concern for the who seek to develop the valuable land holdings of the State Railway of Thailand (SRT).

Along with many other travellers, I am part of that demographic, with my first two arrivals in Bangkok having been by train, first from the south, then from the north toHua Lamphong. I also wrote about the Bangkok-Chiang Mai sleeper in the Time Out book Great Train Journeys of the World.Hua Lamphong is part of my personal history, as it is for millions of migrants, expatriates, and tourists.Hua Lamphong is a metaphor for coming home, going home, and seeking a new life.

Hua Lamphong Station is an icon of Thai popular culture. Its arched, twin-towered frontage is often used as a graphic shorthand for Bangkok in media, maps, and signage. The station is particularly important for being a rare landmark that is secular, expressing not the power of rulers, nor the sacredness of religion, but the lives of ordinary people. The Thai railway’s spoke-like network converges at this hub, so it has long been a beacon for the provincial migrants who journeyed to Bangkok to seek their fortune. It also filled at major holidays with folk returning to their hometowns and farms. The station represents physical and social mobility, especially of the manual workforce.

The name resonates through Thai popular culture, as a subject in film, literature, and folk song lyrics, even in art with the award-winning master painting Hua Lamphong by Tassanai Sethaseree. There used to be a restaurant in a train-hall-sized space calledHua Lamphong Food Station, so named for its dishes from remote reaches of the rail network. The top indie music labelHua Lamphong was similarly named for its variety. Light beaming from the stained glass arch graces the cover of Claudio Sopranzetti’s new graphic novel about the travails of a blind migrant, The King of Bangkok. The station is a metaphor for Bangkok’s everyday life.

Pundits and many of the public worry about whetherHua Lamphong Station will be demolished in a real-estate grab, given so many mixed signals and reversals of non-transparent decisions by different authorities. Only a month ago the priceless Scala cinema was demolished, despite its owners and new leaseholder promising it would be kept for its architectural value. Can such authorities’ words be trusted?

Hua Lamphong is in entirely Western style and was designed by two court architects from Lombardy, Mario Tamagno and Annibale Rigotti, who were inspired by Stazione Porta Nuova in Turin, Gare de l’Est in Paris and the Hauptbahnhof in Frankfurt. The frontage, ticket hall, and platform shed will likely be preserved, but less because of their popular history or architectural merit, rather because they also symbolise two things that are recognised as ‘National Culture’. The edifice will probably be regarded as Thai enough to preserve by virtue of being commissioned by King Rama VI and the role of rail in developing and uniting the nation.

The official Thai criteria for preserving heritage is dominated by the arbitrary age of being 100 years old, and by having a connection to the ’three pillars’ of nationalism: nation, religion, monarchy. This explains why some western hybrid architecture is saved, restored, and lauded, such as temples, palaces, or ministries, while other hybrid architecture is dismissed as un-Thai, especially if it is commercial or doesn’t exemplify the ‘National Culture.’ The Thai-Chinese Chamber of Commerce was going to demolish its old HQ, in the colonial-style former Bombay Department Store, with the justification that it isn’t ‘Thai,’ although outcry led to its conversion into the Blue Elephant restaurant.

Popular culture is deeply meaningful to everyday Thai life, yet isn’t counted as a pillar of Thainess, unless there is some other link, like shophouses getting restored because of the prestigious person who built them. That’s why there was no preservation order on not just the Scala, but several crucial buildings recently lost to Thai architectural history: Thailand’s first skyscraper, the Dusit Thani; its successor as Bangkok’s tallest building and first curtain-walled high-rise, the Chokchai Tower; its world-famous Lumpini boxing stadium; its Iconic Siam Intercontinental Hotel; its first racecourse; its first zoo; its first Supreme Court, or its first purpose-built Parliament. Without such physical landmarks, there are major gaps in the story of the nation, its capital, and its people.

Historical selectiveness is inherent in deciding what counts as heritage, so who chooses has real power. The Scala and several of those landmarks are modernist, and from an era that symbolised a clean slate in Thai history, with a mid-century shift from traditionalism to modernity. The century-old criteria seem absurd when so many people recognise the value of a building half that age. Just as the world comes to re-appreciate mid-century architecture to the point that tourists and aficionados seek it out, the Thai establishment is erasing modernist architecture that is reminded of that era’s challenge to the neo-traditionalism that has been reimposed from above since 1976. To acknowledge the importance of the secular, civic, commercial architecture of the common people goes hand in hand with accepting their voice, agency, and hidden histories.

It’s hard to recall a heritage movement as impassioned as the SaveScala campaign. Besides the emotional link that so many felt to that cinema, the most public anguish has been about the Scala being not just the last standalone theatre left in Bangkok, but also the best one that was ever built in Thailand, perhaps in all of Southeast Asia. But other last-of-a-kind heritage has been erased since the last coup, notably the old town’s only surviving early Rattanakosin wooden houses at Pom Mahakan, which was also the birthplace of likay folk opera. Every heritage body, including the Association of Siamese Architects and the Fine Arts Department official ones, campaigned to keep the houses and had comprehensive plans for their preservation. They were ignored by officials, whose mindset was revealed by the fact the houses weren’t disassembled for reconstruction in a museum but smashed to pieces. It’s almost as if the impassioned public defense of Pom Mahakan and the Scala were part of the reason to obliterate them; they would have been rallying victories for civil society and an affront to the decision-makers.

The tragedy is that many countries come to regret not preserving key buildings that tell their history and act as anchors of identity, from Singapore’s Chinatown to Penn Station in New York to Les Halles market in Paris. When Sydney was down to two ornate old theatres, one was demolished to the huge outcry, and the glorious refurbishment of the other one only underlined the city’s regret at losing a treasure that they were not farsighted enough to save. Thailand has the whole of architectural history to learn from. The lesson is that amid progress, there is a huge benefit in repurposing key old buildings so that they re-energise the site and in doing so help the public and the culture to adjust to change.

One recurrent barrier to heritage is that major buildings get built at major sites. After their original usage has declined, that site often remains prime real estate and so a target for redevelopment. The Scala faced into a soi, but its auditorium filled the last low-rise corner block of a major intersection, and developmental logic would hold that the site deserves a landmark building to match MBK, Siam Discovery, and BACC. Of course, a sensitive project that incorporated the Scala’s architecture would have been even more of a landmark. The reason its value wasn’t appreciated by the owners and decision-makers reveals a gulf in values.

The Scala’s developer had promised to integrate the precious lobby into a mini-mall – a token divorced from the building’s significance to cinematic history. Yet film itself has likewise long been dismissed by the authorities as low-brow entertainment, not a cultural art. Just Imagine if the Scala had been converted into a world-class cinemathèque. Imagine if the university had converted it into a prestigious auditorium for lectures and events. Imagine if it had invested in building a film school on the auditorium and kept the lobby as its showpiece. The demolition of the Scala was not just the loss of a uniquely special building, but the denial of those potential futures.

Hua Lamphong isn’t the only rail structure of note at threat. The fact that the railway offices have hosted Made By Legacy curated markets proves their appeal as a site for repurposing, but they are on real estate that officials want to redevelop to reduce the SRT’s debt. The train sheds and locomotive factories in Makkasan’s marshalling yards comprise a complete industrial history, and the halls would in other cities be turned into a complex of galleries or studios. But they and Makkasan’s expanse of mature trees will be levelled as part of another redevelopment plan. Bangkok’s entire rail heritage could disappear in one unaccountable spasm. IfHua Lamphong gets turned into a rail museum, expect the displays to focus on the royally-commissioned architecture and the ‘Development State’ aspects of rail, and its current expansion from the new hub at Bangsue. Perhaps it could recognise the station’s secular significance in the lives of poor migrants, as a totem of popular culture, and role in the lives of rail workers. Trains and stations have taken on the character of villages-on-wheels, with vendors plying the aisles and station masters tending floral displays – or inHua Lamphong’s case, artificial gardens with twee sculpture at the buffers of each line. The tuning of trains from mobile communities into sites of maximising profit is part of a much wider shift in Thai life. Living history is giving way to museumification at best, repurposing to preserve structures, or at worst, physical erasure of whole aspects of popular culture.