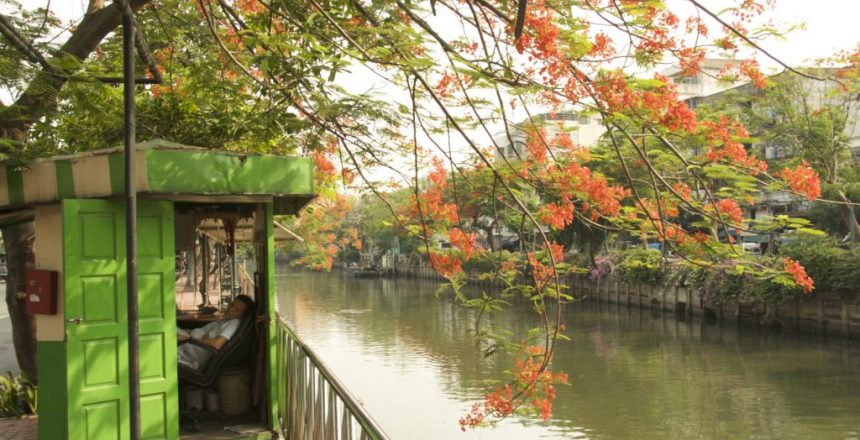 Like Japan, Thailand has a stunning array of flowering trees. Unlike Japan’s cherry blossom viewing festival, it is harder to locate lots of the same flowers blooming together. Here is how to find the best of Bangkok’s colourful blossoms.

Thailand could have its own take on hanami – the festival of viewing cherry blossom (sakura) that has swept across Japan each spring for over a thousand years. “Thailand actually has a lot more variety [of flowering trees] than Japan with their sakura,” says botanist Yongyuth Chanyarak. “If only we knew how to make people appreciate it better.”

Thais already travel to Chiang Mai to view the Wild Himalayan cherry erupt in boughs of pink in mid-January. Now Bangkokians are becoming aware of their own mini-hanami. Pink trumpet trees (chomphu pantip) flank the Chatuchak and Suan Rot Fai Parks along Phahonyothin Road, beside Mo Chit BTS, which sprout clouds of pink in mid-April. Photographers love to snap their sweetheart posing amid the carpet of blooms on the grass. Similarly, while tours go to sunflower fields in Saraburi, Bangkok has a field of them by Satree Witthaya 2 School on Kaset-Nawamin Road that opens their petals in March.

Bangkok had a vast green canopy that has lately been hacked into unkempt fragments. Still, there are concentrations of certain species that make swathes of colour when they blossom. Flame trees ignite, April to May, down Ratchadamri Road and Khlong Phadung Krung Kasem, although the BMS felled many of those canal-side trees in 2021 to make a concrete embankment. It took the embassies along Witthayu Road to save its stately raintrees (jamjuree), planted by the philanthropist Nai Lert. Their crimson rake-like stamens flutter from August to February. The best interlocking canopy of giant raintrees lines the public grounds of Chulalongkorn University, which names its Jamjuree Building and Jamjuree Gallery in its honour. In the new Bangkok Forest Park, an aerial walkway wends through the canopies of several jamjuree trees.

The median strips of Bangkok highways are usually the domain of pruned bushes and tired saplings, with many ripped out for overhead trains. But some have mature avenues of flowering greenery, notably the glorious frangipanis bisecting Charoenrat Road. As frangipani had been named lanthom, and sounded like the Thai word for sadness, they were planted in funerary wats and considered unlucky. Later the tree was renamed leelawadee, so now all can enjoy its playful waxy blooms of pink or white.

Coloured petals attract pollinators by day, but after dark white-flowered shrubs and trees – jasmine (mali), champak, bulletwood (pikul) – become fragrant and use their petals for nighttime pollination. The popular Chinese box trees (dok gaew) – fully grown or clipped into hedges – erupt most months with diamond-shaped petals that smell of almond.

Most dramatic are the golden shower trees (ratchapruek), which cascade with yellow petals. Also called dok khoon, this cassia symbolises both Buddhism and royalty, becoming the National Tree during the reign of King Rama IX, whose colour was yellow due to his birth on a Monday. Its bright yellow chandeliers bloom profusely through April. Santichaiprakarn Park wreaths its old fort in this blossom, while thousands of saplings run the length of the eponymous ringroad, Thanon Ratchapruek.

The peak period of efflorescence is March, the windiest month, when trees distribute their seeds. Aerodynamic seed pods have such self-propelled, auto-germinating ingenuity that Yongyuth calls them “the most technically advanced spaceship.”