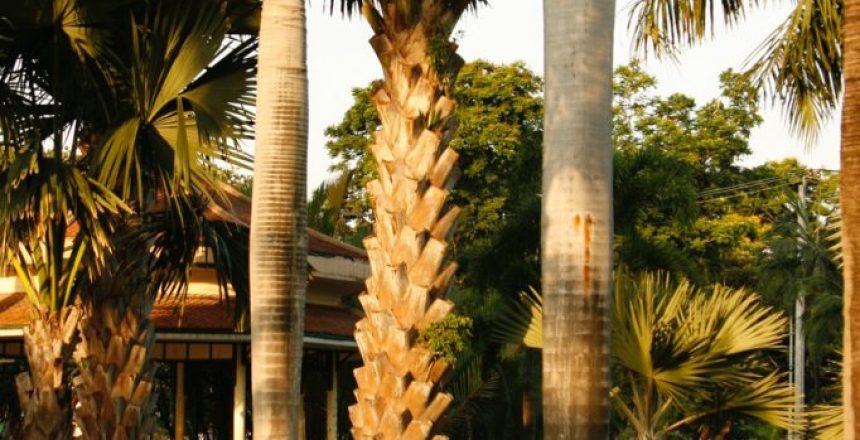 Bangkok has been adding much-needed parks. A few of them are naturalistic, many are formal, some almost entirely paved. Whether it is more green space or more concrete, the city is getting relentlessly landscaped.

Bangkok has long had too little green space, about the least per head of any major metropolis. So the city has been founding parks over the past decade or so. Four new parks are currently underway. Still, there are competing visions about what kind of park the city needs – and who a park is actually for.

Bangkok’s first park, Lumpini, was an exercise in siwilai – presenting a civilised face to the encroaching imperial powers. Named for the Buddha’s birthplace, it was to be the grounds for an Expo world fair that never transpired. Lumpini emulated the English faux-natural style of landscaping as a romantic antidote to urban blight. It remains a treasure and regulars hope that imminent refurbishment won’t spoil its mature, gentle grace.

The more typical Thai approach to gardens draws from the French formal style. Officials favour boxing nature into artificial shapes, with lots of hedge-clipping and tree-lopping, plant pots, and paving. Where the French would scatter gravel, the BMA pours cement, lots of expensive cement. Rama VIII Park, much of it beneath the concrete Rama VIII Bridge, is almost entirely paved. An oasis of grey space.

When considered as a setting for statuary, parks become monuments to bestow a public good. Most are titled to honour royalty, such as King Rama IX Park, Queen Sirikit Park, or Saranrom Park, named for the palace grounds it occupies. The greensward newly laid out along Khlong Saen Saeb, behind Central World and Wat Pathumwan, is dedicated to King Bhumibol, as is the restyling of Nang Lerng racecourse as a park, with lakes and islets forming a giant Thai numeral nine (๙).

During the democratic period, some parks projected a more civic identity, such as Peace Park (Suan Santipharp), Railway Park, or Romaneenart Park in the former Khlong Prem Prison. With the affluent middle class pursuing hobbies, parks acquired the role of exercise venue, with running tracks, cycle paths, open-air gyms, and mass aerobics sessions. Today the BMA has a policy of providing specialist parks, whether for skateboarders, dog walkers, children, or the elderly. Some are purely for cyclists, as the loop around Suvarnabhumi Airport.

As eco-awareness grew, parks have adopted an environmental role, especially as a sink for floods. The private Chulalongkorn Centenary Park has a vast underground tank to capture heavy rainfall, while the spectacular new Benjakitti Forest Park features several zones of wetland ecologies and mangroves. This facsimile of nature is already attracting waterfowl. Meanwhile, the city’s biggest natural swamp, Makkasan, is about to be partly concreted, with a much-reduced fragment of flood-retaining ponds supposedly surviving as a park to showcase environmental responsibility.

The latest fad is park as a backdrop for selfies and Instagram shots. The Forest Park throngs with photographers even before it fully opens. The paths across its wetlands and the aerial walkways through the tree canopies all have bays at vantage points for panoramas, sunsets, and picture-ready plantings. Ringed by a distant urban skyline, Forest Park is easily the city’s best new sight.

The most severe case of Insta-landscaping is the Khlong Chong Nonsi Park. The canal is a crucial flood conduit, yet the BMA is suddenly styling the canal in ways that draw alarm from landscape architects and water engineers. The canal is being covered with ornamental paving, trees planted too close together, unsightly walls along the flanking roads, and a concrete-and-steel ramp from the BTS and BRT stations with photo-lookout bays. They aim to extend this development along the whole canal, uprooting its miles of mature trees and giant pillows of flowering bougainvillea.

There is an economy of park-making. It takes more diligence and expense to maintain mature trees than to fall them and spend a fresh budget on saplings and cement. Chong Nonsi Park is billed as emulating the Cheonggyecheon River Park that has revitalised the centre of Seoul, but it’s the total opposite. The Korean stream was recreated by removing a road, and is twice the width, whereas Bangkok is instead narrowing and covering a canal with concrete, then circulating mains water in ornamental channels on top. Earlier replacement of canals by roads ruined Bangkok’s drainage system, and now this scheme further crimps the capacity for water management. For Bangkok to truly emulate Seoul, some of the four-lane roads flanking it should be turned into a park, and leave the canal intact. But that would mean reducing the priority given to drivers over walkers.

Given the lack of open land, Bangkok will have to plant such ‘ribbon parks’ in the urban margins and along leafy corridors. Incidental strips of greenery improve quality of life, as with the SkyPark garden bridge between Chinatown and Khlong San. Bangkok’s first cycle lane, the elevated path between Lumpini and what’s now the Forest Park, is being landscaped into a ‘Green Mile’ akin to New York’s Highline.

Temporary ‘pocket parks’ on empty lots have been a successful idea for 20 years, as at Chaloemla Graffiti Park. A mini-park marooned in an expressway loop near the airport is mostly just to look at from vehicles, but it’s worthwhile. Greening redundant spaces would transform the city’s overall feel. Dog walkers need plentiful patches of grass, too, as do kids for playing, and neighbourhoods for social wellbeing.

Independent planners are taking the initiative on such visions. ShmaSoEn, the social enterprise arm of landscape architects Shma, founded WePark. This campaign aims to rehabilitate unused scraps of space into recreational areas, with benches, plantings, and sports facilities, linked by landscaped paths for walkers and cyclists that wend beneath expressways, so as to connect several major parks in a giant leafy loop. In that way, the brutal concrete expressways can nurture more natural slow-ways too.