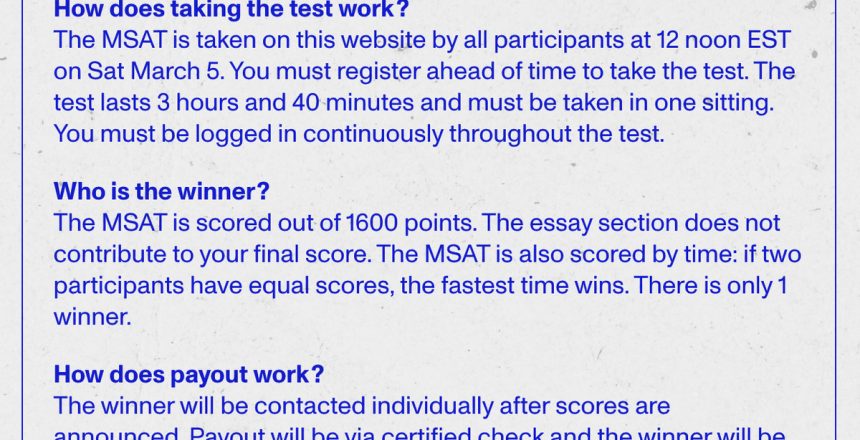 It’ll cost $52 for you to enter, but you could take home thousands — at least. This is the latest project from art collective MSCHF: a one-off, winner-takes-all, massively multiplayer version of the SATs named the MSAT.

The SAT — for non-US readers — is a multiple-choice test taken across the United States for college admissions. Because it’s so widely taken, it’s something of an object of cultural horror. “I actually took the ACT, but as 95 percent of my friends took the SAT, I remember them being out of their minds stressed and spending almost a full 12 months preparing with private tutors and study classes,” MSCHF founder Daniel Greenberg tells The Verge.

So, Greenberg and his colleagues made the MSAT. Registration is open for the rest of the week, and the test itself will take place at noon ET on Saturday, March 5th, with all entrants playing live against one another from their computers. The winner will take home all the entrance fees, and here’s the kicker: cheating is encouraged.

“College admissions are mostly about cheating”

According to Greenberg, this chaotic setup reflects the principles already embodied by the SATs. “College admissions are already a contest, but instead of winning money, a significant portion of players win a mountain of debt,” says Greenberg. “Plus, college admissions are mostly about cheating — rich parents, legacies, and sports are much more likely to get you into Harvard than your test scores are. So, the MSAT is all about cheating! How much can you game an unrestricted online SAT? Let’s find out!”

The MSAT will contain all the regular elements found in the SATs, with reading, writing, and math sections, as well as an optional essay. MSCHF says it took its questions from practice versions of the SAT but modified them so no one could find the answers in advance.

If you haven’t heard of them before, MSCHF itself is an art collective that’s made a name for itself organizing viral stunts like this. Past “drops” from the company include a squeeze chicken bong, custom Nike shoes designed in collaboration with Lil Nas X and allegedly made with a single drop of blood, and a project that let people control a Boston Dynamics robot dog armed with a paintball gun over the internet. How does MSCHF make money? Well, it’s not clear. It’s got VC funding and the credentials to walk into any ad agency it likes, but the company has been adamant it’s not interested in making ads.

In the meantime, then, we get projects like the MSAT. You can read more about the competition here, including entry requirements and rules of engagement. Good luck.

Researchers at Kaspersky have found malware hidden in a modified version of the anonymity-preserving Tor Browser, distributed in a way that specifically targets users in