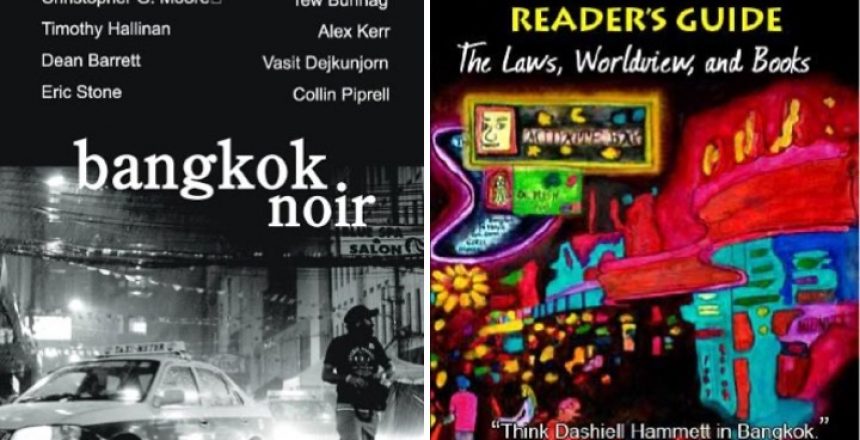 Bangkok doesn’t like realism, so tales of its shadowy underground nightlife worlds are retold as fiction through the lurid genre of noir novels, art and film.

Bangkok is one of those rare cities that has spawned its own literary genre – and, no surprise, it’s noir. Hardboiled crime stories about its seething underbelly make top-selling ‘airport reads.’ Given the difficulty of investigative journalism on the vice economy, noir provides a moody fictional tool to shine a detective’s torch on grisly topics like corruption, prostitution, organised crime, bent cops, and contract killings. Until recently this genre of opaque menace and femmes Fatale has been largely created by non-Thais – and dismissively stereotyped as “sexpat” writing – though that is starting to change. Bangkok Noir is gaining more credibility and more Thais are adopting this bleakest of styles.

The marquee name of the ‘Bangkok Novel’ is John Burdett. His bestsellers Bangkok 8 and Bangkok Tattoo weave local context into the plots and characterisation of his half-Thai cop hero Sonchai Jitpleecheep. Other stalwarts include Tom Vater, James Newman, and Dean Barrett, whose arch “poetic tragedies” reach towards parody, given titles like Skytrain to Murder and The Go-Go Dancer Who Stole My Viagra.

Noir also lends itself to and specially film, taking its shadowy look from the chiaroscuro painting technique, with its 1920s-50s movie heyday in Weimar-era German film and the Hollywood of Hitchcock, Hawkes, and Welles.

Movies about corrupt cops were a staple of Hong Kong, but rare in Thailand due to the pressure to save face. Back in 1986, Panna Rittikrai’s Thai Police Story came under the heading of stunt-heavy ‘action’, but pitted the protagonist against drugs gangs and corrupt police. A few dramas were more nihilist than noir, such as Attaporn Thihirun’s Khon Jorn (1999), about a homeless man rescuing his daughter from predators.

Probably the first true Thai noir film was the Pang brothers’ tale of a contract killer, Bangkok Dangerous (1999), which they remade for Hollywood in 2008 with Nicolas Cage. Then the second Thai series to be made by Netflix, Kongkiat Khomsiri’s Bangkok Breaking (2021), tapped this fetid pool of material, tracking one of the volunteers who ride with the “body-snatcher” ambulance and emergency crews who rush to accidental and less accidental violence. A contributor to Bangkok Breaking was Prabda Yoon, a novelist, musician, and director whose movie Motel Mist (2016), tackled sexual extortion with a pop-noir verve.

It has been risky for people to photograph the lurid world of go-go bars on film due to that world’s inherent illegality and reliance on official impunity. But photojournalist Nick Nostitz gained the trust of his subjects and depicted the plight of nightlife addiction in his book Patpong: Bangkok’s Twilight Zone (Westzone, 2000). Photographer Ralf Tooten and writer Roger Willemsen produced a book, Bangkok Noir (2011), that records their dusk-till-dawn roaming, which was more stylistically noiresque than documenting the forbidden.

Noir – or any kind of realism – has rarely been the favoured mode of Thai art, while protest art is too didactic or symbolic to count as noir. A commentator on the subject, former Hollywood producer Chris Coles, records in luridly hued paintings the red-light districts, sex workers, johns, and associated lowlifes, collected in books like Navigating the Bangkok Noir (2011). Coles compares his expressionistic work to that of artists documenting earlier demimondes: Henri Toulouse-Lautrec in Paris or Georg Grosz in Weimar Berlin. “It’s such a rich subject matter, but no local artists are painting it,” he laments. “This scene will surely disappear and with no trace unless people depict it.”

An expat who’s campaigned against human trafficking, Colin Cotterill, is famed for his noir Lao coroner novels, but began as a cartoonist whose scabrous Man Farang panels in Bangkok Metro magazine caricatured the generic sexpat. Coles and Cotterill often join other noir authors in their periodic meet-ups, initially held at Bangkok’s Check Inn 99 pub, lately the Queen Bee. As the Bangkok noir has become more recognised as a genre, its practitioners are becoming more accessible as a subculture scene.