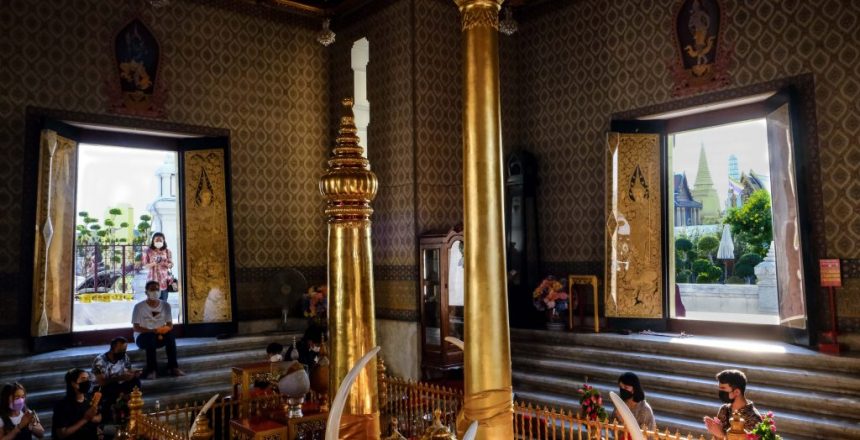 Party, pray or make offerings to snake spirits? How to mark Bangkok’s 20th Cycle anniversary as the Thai capital.

Bangkok is a tiger and 2022 marks a special year in its life, if you believe in numerology and astrology – as most Thais do. On 21 April 2022, Bangkok will be 240 years old. That marks the completion of 20 twelve-year astrological cycles since the city’s founding. We await announcement of the rituals to mark what is expected to be an unstable year, including the election of a new city governor.

By astrological reckoning, the duang meuang (city fortune) began at the 9th baht (an archaic increment) after dawn on the 10th day of the waxing moon of the sixth month in that Year of the Tiger, 1782. That’s 06.45 on 21 April.

Once again, this is the year of the Tiger. Completing a cycle back to one’s birth year animal is less a cause for celebration than a time for caution as it heralds risky transformation. Hence residents make offerings to the gods, whether at a Thai temple, Chinatown’s Wat Mangkorn, or the home of the city’s guardian angels.

The city’s protective spirits are housed at lak meuang – the City Pillar erected at the moment of Krungthep’s birth. Yet go there and you’ll find two city pillars. Plus there are two foundational horoscopes. And Krungthep is two cities, conjoined in 1972 with Bangkok’s predecessor as capital, Thonburi. Ambiguity is built-in to the city’s very foundations.

Legend has it that as the carved log of chaiyaphruk (Javanese cassia) was erected, four snakes slithered into the hole, joining the parchment horoscope. Unfortunately, duang meuang “is a destiny that can’t be altered,” says astrologer Fongsanan Chamornchan. “It’s like a person. You only have one fate once you’re born.”

But Bangkok is good at improvising alternatives. As the auspicious timing couldn’t be altered, the serpents’ sacrifice prompted King Rama IV to bury an improved duang meuang beneath a second city pillar in December 1852. He also commissioned gilded statues of the five guardian spirits: Phra Sua Meuang (protecting land, water ad troops), Phra Song Meuang (protecting the nation); Chao Hoklong (responsible for time and all incidents on earth) and two attendants of the God of the Dead, Phra Kanchaisi and Chao Chettakhup.

There was much foreboding about a prophesy that the 150th anniversary would be inauspicious. A bridge to Thonburi was forecast to enhance the city’s fortune, and the first span across the Chao Phraya, Saphan Phut, duly opened on the 150th anniversary in 1932. Yet that same year, a coup abolished absolute rule. The new constitutional regime declared itself against superstition, yet the dimensions of the Democracy Monument reflect the numerology of the date 24 June 1932. Timing is literally written into Bangkok’s landmarks. Bangkok’s birthdays have lately got more celebratory. Its Bicentennial in 1982 featured a royal barge procession and heritage restorations of Vimarnmek teak mansion and the Drum Tower. In 2002 a parade carried offerings to the City Pillar to mark its 220th year. If Covid prevents pageantry from marking the 20th cycle, we’ll shortly have Bangkok’s 250th birthday in 2532. To mark that sestercentennial, the BMA has already started projects to improve the urban landscape and quality of life. Serpents’ curse or not, destiny might perhaps be altered after all.

This article relates to a chapter in Philip Cornwel-Smith’s latest book, Very Bangkok: In the City of the Senses. It is the long-awaited follow-up to Philip’s influential bestseller, Very Thai: Everyday Popular Culture. Both books are available from leading retailers and direct via the publisher at RIVER BOOKS LINK.