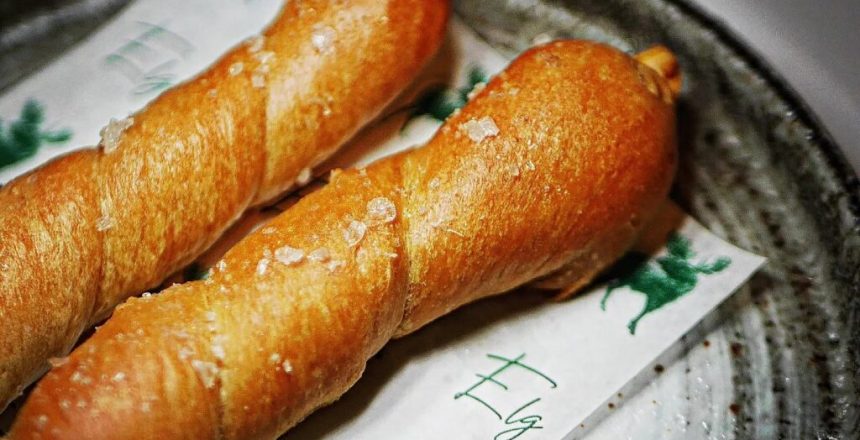 There are more than a handful in Bangkok that dabble in Scandinavian cuisine or with “Nordic-inspired” dishes but none seemingly have embraced Norwegian cuisine as it’s core concept and stuck around to talk about it.

“Elg” Bangkok (Elg meaning Moose in Norwegian) restaurant has been teasing us on our social media feeds, enticing us with Skri, Salmon, Fjord trout and whole Langoustine “Norway Lobster” on earthen tableware and mists emanating from polished rocks, decorated with twigs and bits of fern.

Might not sound so appealing but when presented well, there’s something chilling and ethereal about Norwegian cuisine which was reason enough for us to investigate further.

Elg Bangkok is a new restaurant located in the unsuspecting Phrakanong Road, a frantic street filled with fast Thai food, hardware and trinket shops that lies just beyond the Phrakanong market. An area far from famous for ‘fine’ dining hot spots and to which Elg Bangkok appropriately proclaims, “The First Modern Scandinavian Cuisine Fine Dining – at Soi Sukhumvit 71!”

When we enter the tiny shop front house, we’re met with a narrow door which looks directly upon an even tinier kitchen to our right. The furniture fits the sizing appropriately with small squared tables covered in thin white cloth, a single moose’s head on the wall which overlooks the room and decor which feels more entrepreneurs playing at fine than any fine restaurant that you may be used to, but it is quaint and charming if modest, and quite frankly there’s still a lot to be admired there when one is limited to space and budget.

Chef “Benz” Kananon Kondee owner, who also runs the kitchen is a Thai born, Pathum Thani native who from his youth, lived, studied and worked in Norway, covering ground from Trondheim and Røros over his career then returned to Thailand, Bangkok to build his dream restaurant with his Thai wife. Now onto their second  menu, the “Spring Menu” after only 4 months of operating, the future looks bright with diners now looking at intimate stand-alone dining spaces providing something new or original, if not fun and casual.

Bangkok Foodies were eager to talk with Chef Benz, owner and Chef of Elg Bangkok to find out, firstly ‘why’ anyone would open a Norwegian restaurant, and a fine one at that, in this particular area, also  the challenges he has faced with such a niche cuisine market and most curiously, how his type of Norwegian fare has weathered with the locals thus far.

BKF: Which city or town in Norway have you lived in?

Chef Benz: I was living in Trondheim for 7 years and moved to working at Røros Hotel for 3 years

BKF: Can you tell us a little about your background, from Bangkok to Norway?

Chef Benz: I was born in Pathum Thani and went to school here until I was 14.

My Mother married a Norwegian man and as I was just 14 so I had to move there with her.

After that I went to culinary school in Trondheim, where I studied at school for 2 years and became a trainer at a restaurant and a hotel for 2 years. I chose Røros Hotel because the hotel has a long history and interesting background. I moved to Røros as a trainee for 2 years and worked there as a chef de partie for 1 year in a la carte section.

BKF: Why did you decide to return to Thailand?

Chef Benz: I first came back to Thailand in 2019. After I finished at Røros Hotel, I decided to travel to Thailand to learn more about Thai food and I met my wife at the culinary Thai food school (MSC at Thonglor) My wife and I have an idea to create comfortable Thai modern food, so we opened a comfort food restaurant at Ratchathewi named Baan Progressive Thai Cuisine. At Baan Progressive Thai Cuisine, it was like a playground for us to try new things.

BKF: What was life like for you growing up in Norway?

Chef Benz: It was hard for a kid who couldn’t speak any English or Norwegian to move to any place. I struggled for 6 months before I began to speak Norwegian and English. I didn’t agree to move to Norway at first, but after three years I thanked my mom for taking me with her.

BKF: Why did you decide to open the Elg Bangkok restaurant in this location?

Chef Benz: After having the Thai restaurant we felt it was time for us to build what we long dreamed about. This location, my wife knows the owner and we think in a good 3-4 years this street has the potential to become like Thonglor or Ekkamai.

BKF: How would you describe the cuisine at Elg Bangkok?

BKF: How would you describe this new Spring Menu?

Chef Benz: Like every menu for this year, the concept of it is like we are taking you on a trip to Norway, to experience what we eat and the roots of Scandinavian foods.

BKF: Are there obstacles with making Norwegian cuisine and having access to authentic produce and ingredients in Thailand?

Chef Benz: We were struggling with searching for fresh ingredients from Norway when we started testing for new seasons, but I think it will get easier along the way.

BKF: Why do you want to bring Norwegian cuisine to Bangkok?

BKF: Do you think Norwegian cuisine will be a challenge to attract a Thai market?

Chef Benz: Not at all, because Scandinavian cuisine has become trendy lately.

BKF: What are the future plans for Elg?

Chef Benz: We are shooting for the star, but along the way we do what we are passionate about and we do it together as a team.

BKF: What has been the reaction so far from the locals ?

Chef Benz: We are fully booked almost every weekend this month so… we are trying our best.

We did try Chef Benz’s cuisine and although a star is in the faint distance, there is potential there for Elg Bangkok to grow and become a leader in this unexplored field. The tasting menu is very fairly priced and the produce is fresh but more so, Chef Benz clearly puts all his heart and soul into every dish and we can only bask in his likable nervous enthusiasm and energy. The drinks/alcohol menu could do with some adjustments as the prices certainly raise eyebrows for this setting, so much so that we sadly avoid ordering any drinks at all, but iron out some of the kinks and you’ve got yourself a very cool little jewel in the Nile that’s worth supporting.